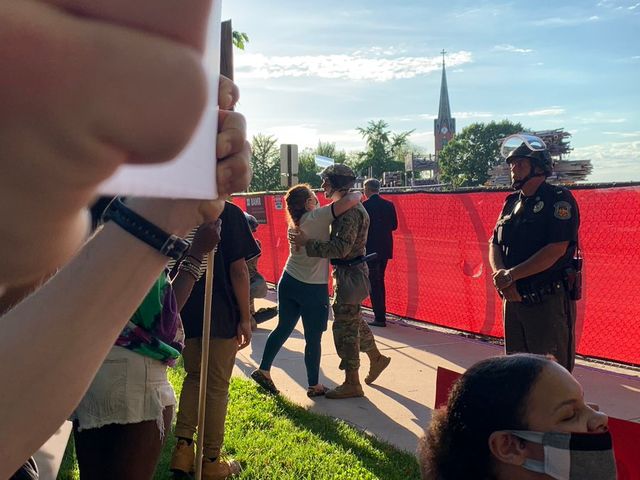 JEFFERSON CITY - Several hundred protestors gathered at the Missouri State Capitol Monday to honor the death of George Floyd. Protestors came from all over the state, demanding justice.

Around 30 members of the National Guard stood on the front lawn of the Missouri State Capitol.

Governor Mike Parson signed an executive order on Saturday to activate the National Guard to assist law enforcement with violent protests. The protests remained peaceful and protesters talked about changes they want to see happen.

One protest organizer got on the megaphone and announced to the crowd that Monday's protest was going to be peaceful. The protest stayed calm.

Protestors chanted "black lives matter" and "silence is violence" throughout the evening.

Some protestors chanted at guardsmen to "take a knee" and several did kneel. After this, one guard even gave a protestor a hug.

One protestor said to the group, "We are asking for human rights."

Larry Shelton, a protestor from St. Louis said he wants people to see the hope and positivity that might come from protests.

"If you believe it, you will conceive it," Shelton said.

"It is tiring to have that worry, not just a couple of hours every day, but 24/7," one protestor said. "It is tiring.  It is exhausting. It's not just a black issue.  It's a people issue, it's a humanity issue."