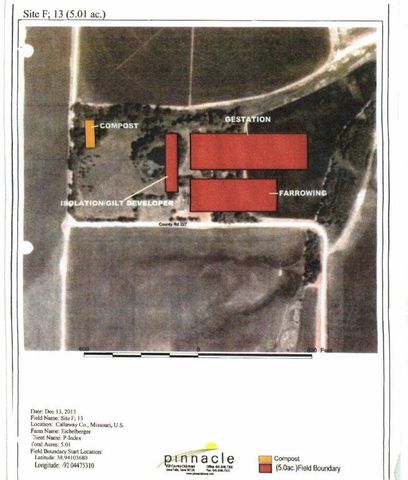 CALLAWAY COUNTY - Opponents of a proposed Callaway County hog farm expect hundreds to fill a local school to fight against the company moving to their area.

The Water Protection Program, which is a part of the Missouri Department of Natural Resources, has scheduled the public hearing next month to allow community members to voice their concerns before any decisions are made.

Callaway Farrowing LLC is a concentrated animal feeding operation, or CAFO, that would bring almost 10,000 hogs to the area.

The proposed permit calls for three barns to be built on top of existing ponds on just 20 acres of land. Opponents are concerned that this could lead to water contamination.

"The ponds have been there for many years, according to Google Earth," said Terry Spence of Socially Responsible Farmers. "We don't know where the water in the ponds is coming from, it could be underground. If they build pits they could leak or crack. It's a no brainer that they would prevent something like that."

The Iowa-based company Eichelberger Farms Inc. first notified neighbors of the sow farrowing operation proposal in May. It later changed the name of the operation to Callaway Farrowing LLC.

Eichelberger Farms Inc. did not return calls from KOMU 8 News, but the Callaway County Commission said it has done research on the father and son organization.

"We've talked with Iowa where this owner and his sons have an operation," County Commissioner Donald Kritzer said. "We talked with that county about their health issues, their regulations and how these people are as partners in the community and they've had no complaints, no issues."

Kritzer said opponents have other concerns.

"It's not just about smell, it's also about the environment and where all of their waste is going," he said.

Waste is the number one concern, according to nearby residents. Neighbors formed the Friends of Responsible Agriculture to fight against the company in early July.

Member Jeff Jones, a farmer, said, "When the manure is spread on the land as fertilizer if it is not spread in the correct ways a lot of this can end up in the streams and our water sources."

"We want to make sure the DNR is aware of the situation," he said, "and when the application of the manure is put on the land that it is put on in such a way that it does not run off and it is monitored in a way that it doesn't end up in our water."

Members of Friends of Responsible Agriculture have been working alongside the Socially Responsible Farmers and the Missouri Rural Crisis Center to fight this proposal. A petition with almost 1,500 signatures was turned in to the DNR, the Callaway County Commission, and the owner of the land, Gary Horstmeier.

Kritzer said, "First of all we're glad we have a lot of citizen input, we do want to know how everybody feels about it."

"About 1,000 of those signatures were Callaway county people," he said. "We did look down through the list on it so about 400 to 500 were outside of the county. But we're always glad to know how people feel.

Kritzer said only a fraction of the county has signed.

"We do have 44,000 residents in the county, so it's a far cry from saying it's the majority," he said. "So as upset as they want to get with the commission for not getting on board with them on it we have had numerous phone calls and people who have stopped in to talk with us and support the decision we made in not getting heavily involved with the state in trying to stop this."

Aside from the concerns over possible water contamination, the groups are using other avenues in efforts to stop development. They have asked the Callaway County Commission to form a committee to create a health ordinance that would restrict production at the farm.

"We want to find out what our level of authority is," Kritzer said. "Several counties in the state do have health ordinances but before we get into that and start appointing a board we want to make sure we can give them some direction."

A prior agreement with the landowner is being reviewed. According to Friends of Responsible Agriculture secretary Shirley Kidwell, an agreement was made with the Horstmeier in 1994, barring him from adding any other hog facilities within a five-mile radius of his current Pork Masters facility.

Horstmeier did not return calls from KOMU 8 News on the matter.

Spence said he is concerned that more out-of-town large-scale operations will impact the local economy in a negative way.

"With these large operations everything is brought in and everything is taken out. There's no value left for that area or that local economy," he said. "I think farmers who own the land and the animals and make all day-to-day operation decisions brings money back to the local economy. We buy things locally, sell animals locally, which brings money back to your county.

Jones said there's a better solution than the current proposal and he hopes the public meeting will finally make that clear to the DNR.

"If they could take this to a less populated area to where they could spread this out, possibly across more acres and affect less people, to me that's an answer," Jones said.

The public meeting will be held at Hatton-McCredie Elementary School in Kingdom City on Nov. 6 at 7 p.m. After the meeting, the Water Protection Program will make a recommendation to the Clean Water Commission on whether or not to approve the proposal.