Public weighs concerns over bill that would allow firearms on campuses 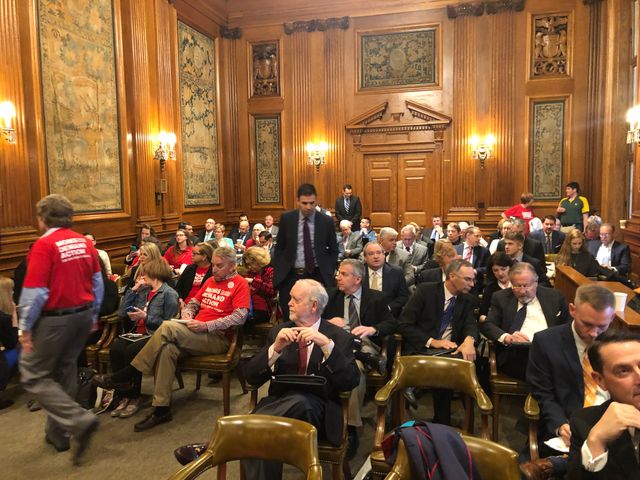 JEFFERSON CITY - People packed the hearing room for a Senate hearing Thursday on a bill that would expand where one can carry a gun.

Legislators and members from groups like Moms Demand Action came to voice their support and concerns about House Bill 575, which would allow for faculty and staff carrying a concealed weapon (CCW) on public university campuses in Missouri.

This bill would “designate one or more full-time faculty or staff members as campus protection officers.” Supporters said it’s intended to increase safety on Missouri campuses, but some students feel it would do the opposite.

“It’s just adding fuel to the fire if you ask me,” MU student Keion Willis said. “I mean, it just wouldn’t be good.”

At Thursday’s hearing, those in favor of the bill’s passing, like Royce Barondes, a university professor, said it would in fact make campuses feel safer, referencing a previously released Florida report.

“The Parkland commission indicates high school campuses are safer if there are armed teachers on campus, I believe the same considerations apply in respect of university property,” Barondes said.

Currently, the bill text says a “campus protection officer” must obtain a CCW permit in order to perform any duties. Sen. Brian Williams, D-St. Louis, raised concerns about the credibility of obtaining one and still being able to carry a firearm.

Others raised concerns about the mental health of students on college campuses. Amy Rogers' sister-in-law was killed by a gunman at a university in Arizona in 2002, when a student grew upset when he was failing classes.

“There’s so many things that this conceal and carry would make legal on campuses like what this gentleman did,” Rogers said.