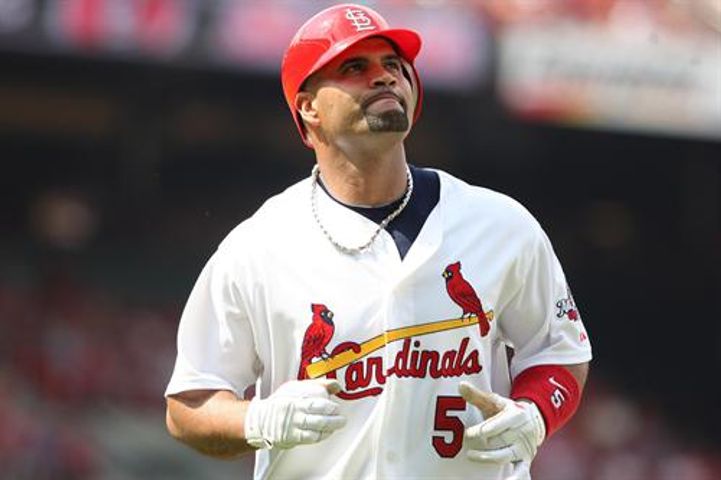 ST. LOUIS (AP) -- Albert Pujols hit the third-longest home run at Busch Stadium this season and the St. Louis Cardinals overcame an injury to starter Edwin Jackson with stellar bullpen work in a 6-2 victory over the Colorado Rockies on Sunday night.

Yadier Molina had three hits, a walk and two RBIs for St. Louis, which took two of three from Colorado. The Cardinals remained five games behind NL Central-leading Milwaukee with 42 games to go, six of them against the Brewers.

Mark Ellis homered in the first for the Rockies, who have lost four of five. Esmil Rogers (6-2) issued a career-high seven walks, one intentional, in five innings. Colorado has lost six of its last seven in St. Louis and trails the all-time series 82-81.

Pujols passed teammate Lance Berkman on a three-hit game with his National League-leading 29th homer in the first, a two-run drive estimated at 435 feet by ESPN Research, that soared over the visitor's bulllpen and cleared the left field bleachers. The homer sparked a four-run first that matched the Cardinals' season best for that inning.

Jason Motte entered with a 3-0 count against Ty Wigginton and two men on with one out in the sixth after Jackson was hurt on the followthrough of his 98th pitch with what the team described late in the game as a cramp. Wigginton flied out on a full count and Chris Ianetta hit a comebacker to end the threat.

The Rockies loaded the bases with one out in the seventh against two pitchers and their 4-5 hitters coming up before being thwarted by Octavio Dotel, who struck out Troy Tulowitzki and caught Todd Helton looking on a curveball. The 37-year-old Dotel retired five in a row, four on strikeouts.

Molina and Skip Schumaker gave the Cardinals breathing room with run-scoring singles in the seventh off Edgar Gonzalez, making his first major league appearance since Sept. 27, 2009 when he was with Oakland.

Jackson (2-1) has a 4.62 ERA in four starts over 25 1-3 innings with six homers since coming to St. Louis in a deal that sent outfielder Colby Rasmus to the Blue Jays. The right-hander needed 37 pitches to get through the first inning but trailed only 2-0 after striking out Ianetta with the bases loaded, and allowed two runs in 5 1-3 innings.

The first four Cardinals to reach base scored against Rogers. But St. Louis left the bases loaded in the third when Rafael Furcal flied out on the first pitch after Rogers walked Jackson and stranded two in the fifth when Skip Schumaker grounded into a double play.