'Puppy love' might be more than just a saying, research suggests 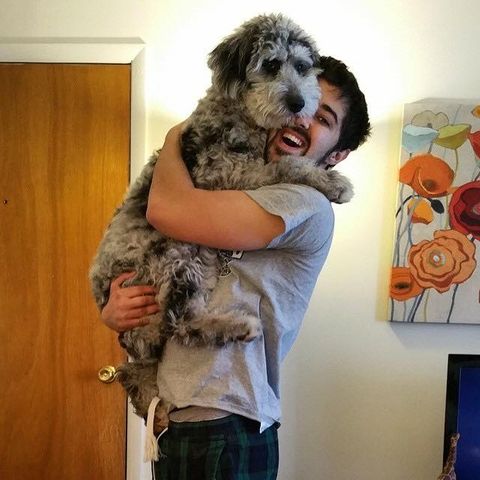 COLUMBIA - A recent study suggests 'puppy dog eyes' may lead to a deeper bond between humans and their pooches than you might think.

Takefumi Kikusui and his team of Japanese researchers from Azabu University published research that revealed a boost in the hormone oxytocin when humans and their dogs gazed into each other's eyes.

The researchers also conducted the study on wolves but the results did not show an increase oxytocin.

Although the research was conducted in Japan, the team has a colleague in Columbia who helps conduct similar research. Rebecca Johnson is the director for the Research Center for Human Animal Interaction (ReCHAI) and said the Japanese team is doing very exciting things in regards to the hormone released when humans and animals interact.

"The research shows great promise for us," Johnson said. "It's part of a larger body of research on the idea of oxytocin."

Johnson said the 'feel good' hormone oxytocin is released in our brains during pleasurable experiences like giving birth, breast feeding and looking at a companion animal.

"When we have this oxytocin released in our brain, then we feel warm and fuzzy toward whatever the object is of our attention at the time," Johnson said. "And in companion animals in particular, they feel that as well so we know that it's reciprocal and it's very powerful."

Johnson said oxytocin is also known for playing a role in emotions such as love.

"Humans and dogs, also with cats, have a special love for each other," Johnson said. "There is an unconditional love and acceptance."

Naif Bartlett owns an Australian Shepard-Poodle (Aussiedoodle) named Koda and said there is nothing like the pure happiness and unconditional love dogs have to offer.

"I can't take a shower without him either trying to jump in the back or sitting there lying next to the tub," Bartlett said. "I can't even go to the bathroom at home without him coming in, barging in the door. He knows how to open doors too."

But Barlett's relationship with his dog, Koda, even goes beyond those closed doors.

"We'll still go get haircuts at the same time," Bartlett said. "He gets groomed and I get a haircut. I can usually go about the same as he goes, eight weeks, without a haircut. I've also snuck him into a movie theater before."

Bartlett said he would compare owning a dog to having a kid.

"You always have to keep an eye on him," Bartlett said. "When he does something wrong, you know, you yell at him like you would yell at a kid. Well, not yell but discipline."

Johnson said  animals, unlike humans, love their people no matter the situation.

Bartlett said nothing compares to walking in his front door.