Puppy on the mend after rescue from Columbia dumpster 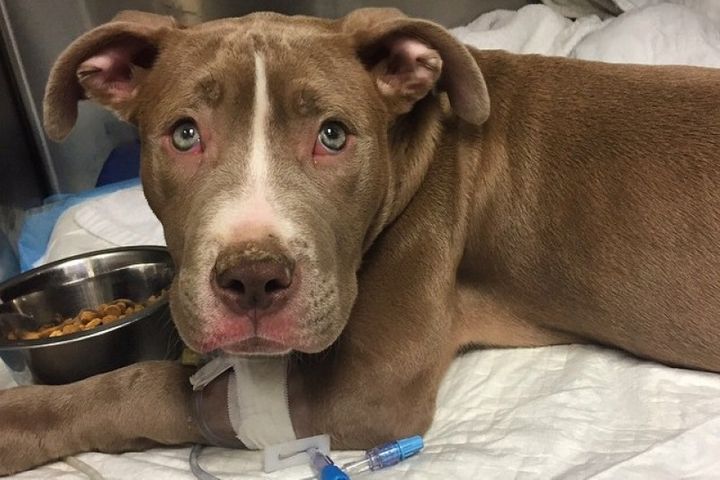 COLUMBIA - A pit bull puppy that had her leg amputated was released from the MU Veterinary Hospital Wednesday after she was found abandoned in a dumpster at the Ashland Manor Apartments in Columbia April 14. (See photos and video.)

The dog was found with a badly fractured femur in her right rear leg and severe soft tissue damage in one of her front legs.

Jill Swain and her boyfriend, Nathan Boone, heard about what happened to the dog through a friend and chose to temporarily adopt the dog and pay her medical costs. They named the puppy April. Soon after, they set up a GoFundMe page, raising nearly $4,000 in under a day to pay for her medical costs.

Boone said the outpouring of support is "heartwarming."

"You go from a position where you've lost all faith in humanity when you find a dog in a dumpster," Boone said. "Then, 24 hours later, an entire community comes together to save an animal's life."

Boone said he and Swain are currently foster parents to April. After she completes six to eight weeks of therapy, he said, they will begin looking for a permanent home.

"We really want to focus on getting her healthy," Boone said. "It's going to be intensive daily physical therapy."

Boone said numerous people have contacted him and Swain about adopting the puppy.

"There have been a lot of people inquiring about April," Boone said. "But first thing's first, we need to get her rehabbed, get her mobile, and get her healthy."

Andrea Waner, spokesperson for the Columbia/Boone County Department of Public Health & Human Services, which oversees animal control for the city, confirmed to KOMU 8 News it is investigating.

Waner said animal control intends to work with the Columbia Police Department. No suspects have been named.