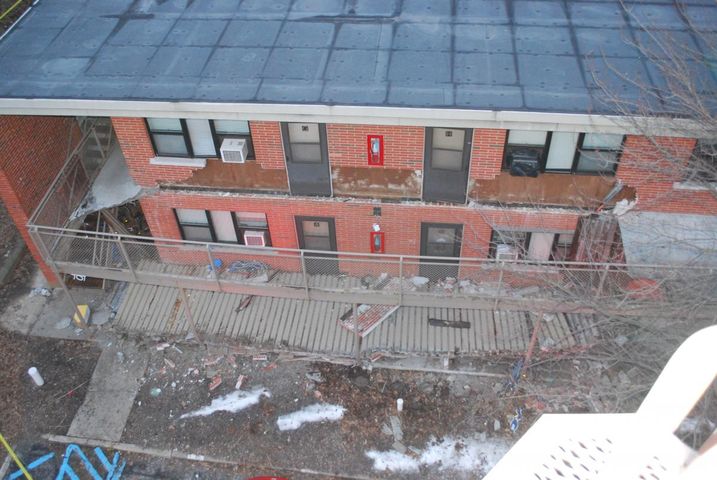 COLUMBIA - It's been a little over a year since University Village Apartments collapsed, and new interviews and documents obtained by KOMU 8 News raise questions about the collapse and the death of firefighter Lt. Bruce Britt. But papers and analysis don't make handling his death any easier for those in the Columbia Fire Department.

Emergency responders are not allowed to talk about the specific events of the collapse, because of pending legal action, including a wrongful death suit filed by Britt's widow. But experts are weighing in.

A retired Louisiana fire service veteran, with 49 years experience in inspections of fire and structure safety, examined the records of incidents at University Village, which the fire department responded to from 2009-2013, and said poor building maintenance was a likely cause of eventual collapse.

Warren Deemer said, "I would submit that a structural failure occurred causing the walkways to separate from the building due to lack of proper maintenance and inspection of the facility over the years."

A federal report from the National Institute for Occupational Safety and Health (NIOSH) cited miscommunication as a key issue leading to Britt's death. The 911 transcript shows the caller reported a roof collapse, saying they were trapped inside their apartment.

Deemer said the sway of the walkway could have made the residents feel trapped inside.

"The reports called in to the 911 operations center add substance to the residents feeling the sway and unsteadiness of the walkway along with reports by the callers that this was not the first time they experienced the unsafe conditions of the walkways and building upkeep," Deemer said.

KOMU 8 News contacted dozens of fire consulting agencies across the state and country asking for analysis of the documents, but none wanted to comment. Deemer said this was likely because no one wants to "point any fingers as to the responsibility or liability, due to the tragic loss of the firefighter's life."

Jenkins said, while firefighters are trained to manage unknown emergency situations, there is no way to expect or prepare for the loss of one of your own.

"That morning that the accident happened was something that a lot of us have never experienced in our careers, but the men and women there performed admirably to the circumstances," Jenkins said.

Lt. Jesse Cash, one of the firefighters working with Britt at the scene, said understanding the risk doesn't mean he understands the loss.

"We prepare for different situations, and it's always in the back of your mind, " Cash said. "But when it happens this close to home, it really stands out. It really makes it hard to forget about it."

Both Cash and Jenkins said the accident and Bruce are always on their minds.

"We haven't forgotten Bruce," Jenkins said. "You know, me personally, in my fire helmet, I've always kept a picture of my son because that reminds me at a fire scene that I‘ve got to do things that make it safe so I can go see my son when my shift is over. Now I carry Bruce's picture in my helmet as well. Bruce is very near and dear to my heart. So every emergency response I go to and I put that helmet on, it's with me. Bruce is with me. So he's at every call go to. "

Cash said, "Just the thought of the whole thing of just how dangerous this job can be in parts. Even when you're doing stuff right like you're supposed to, bad things can still happen."

MU Says it Could Not Prevent University Village Collapse