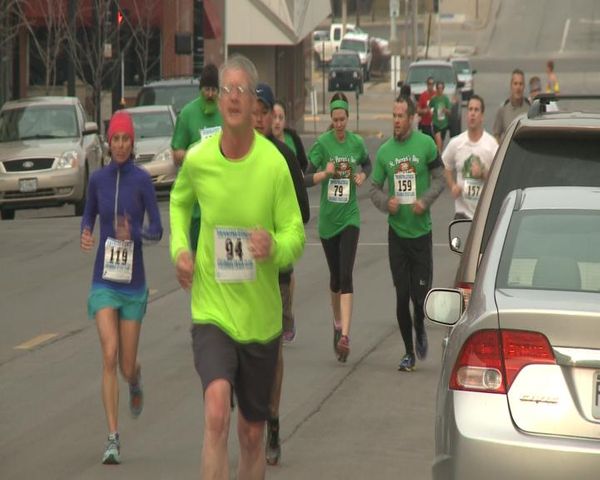 The course for the St. Patrick's Day 5K took runners through downtown, starting at Boone County Courthouse and heading south toward MU's campus. Steve Stonecipher-Fisher, St. Patrick's Day 5K race director, said 21 volunteers were stationed at intersections to control traffic while racers worked their way through the course. He said having volunteers who know how to keep runners safe are essential.

"We make sure our volunteers are folks who have participated in things and know what needs to happen to begin with," Stonecipher-Fisher said. "They get good instruction on what they're to do in terms of controlling traffic and what to do if traffic doesn't do what you tell them to do. We've got all the cross-streets and turns manned by people and then we have a lead vehicle which gives the public a better idea that we've got something going on."

The streets did not completely shut down for the race. Volunteers held stop signs at intersections when runners needed to cross. Stonecipher-Fisher said the race's early morning start time helped avoid major issues since not many drivers were out at that hour.

The Columbia Track Club organized the race and planned the route. Stonecipher-Fisher said the city did have some input on the course's design.

"I generally try to plan a route that is relatively simple and takes fewer volunteers," Stonecipher-Fisher said. "In working with the city, they no longer want anyone using College [Avenue]. I understand that, although this time of day I don't know if it's much of an issue. But they decided that they couldn't approve courses on College. The course we used to use takes 15 volunteers and it's simpler. But avoiding College we added six volunteers, so there are more cross streets. That's all right; it's just we have to find folks to do that."

Stonecipher-Fisher said CTC has never had any safety issues despite holding races downtown.

"We're the track club and we do 25 events a year, so we have a pretty good track record on knowing what we're supposed to be doing."