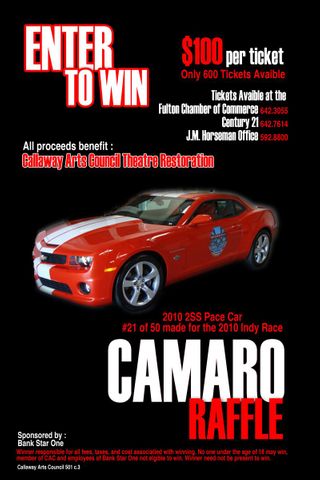 FULTON - The Callaway Arts Council is selling 600 raffle tickets that will help the council's effort to restore the downtown Fulton Theatre. The raffle winner will drive away in a 2010 Chevrolet Camaro used as a pace car in that year's Indianapolis 500 race.

The car is one of 50 cars made specifically for the 2010 Indy Race. The collector who sold the car agreed to ship the Camaro to Fulton free of charge. The car is expected to be in Fulton on Tuesday around noon for display on a showroom floor.

Tickets are available at the Fulton Chamber of Commerce, Century 21 and J.M. Horseman Office. Each ticket costs $100 and winners must be over the age of 18.

The old theatre on Court Street built in 1928 was originally a Vaudeville theatre that hosted traveling acts, but for the past 10-12 years, it remains an eye sore for downtown Fulton. Callaway Arts Council board member Dale Lewis said the council wants to keep downtown vibrant and give people a reason to visit.

"We want--just like this car-- this theater to be something special that catches people's eye and make them want to come back," Lewis said.

Lewis said the council wants the theater to be for performing arts but the focus is to raise enough money to work on the exterior of the building. The renovated theater would show silent and modern films, host local concerts and live shows.

The contest ends whenever all tickets are sold. So far, they have sold about 16 tickets without much advertisement. Lewis said they hope to have enough tickets sold by Halloween so they can reveal the winner that day at the old theatre.