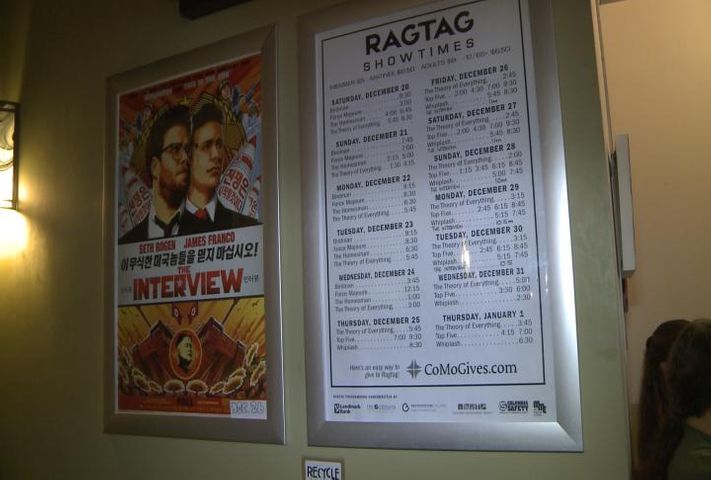 COLUMBIA - The Ragtag movie theater in downtown Columbia will show the controversial movie "The Interview" Friday.

The movie was added to the theater's show times, after Sony Pictures announced the release of the film to a limited number of theaters across the country Wednesday, despite threats the FBI has said came from North Korea. The hacking attack led Sony Pictures to cancel screenings of the controversial film.

The comedy centers on an assassination plot against the North Korean leader Kim Jong Un.

Moviegoers in mid-Missouri will be able to watch the film at Ragtag starting Friday at 11 p.m.

One moviegoer said he plans to watch the movie soon, despite not being very interested in watching it before.

"Now with everything being so galvanized, it's definitely caught my interest," said Caleb Inman, a recent graduate from Lincoln University in Jefferson City. "So much has been maybe from North Korea or maybe from others because of this movie, it's something that I kind of want to see what it's all about and why it's causing all this drama to unfold."

He said he is not surprised Ragtag decided to screen it.

"I didn't actually expect it, but they do show a lot of films that other places aren't willing to show. I guess this would be the place in Columbia to show it," Inman said.

Ragtag's director of operations, Cory McCarter, said the theater is not worried about threats.

"We know that a lot of people want to watch it and we're not afraid to show it I guess. We are doing our patriotic duty,"  McCarter said.

He said Ragtag is expecting to have a busy night on Friday, as a lot of people have already called with questions about tickets for the movie.

Tickets for Friday's screening will go on sale online Christmas Day at midnight at Ragtagcinema.org or at Ragtag's box office starting at 1:30 p.m. Friday.

Other Columbia theaters, including Forum 8 and Regal Columbia Stadium, do not have "The Interview" on their current or future listings. The Capital 8 theater in Jefferson City and B&B Fulton Cinema 8 are not showing it either.