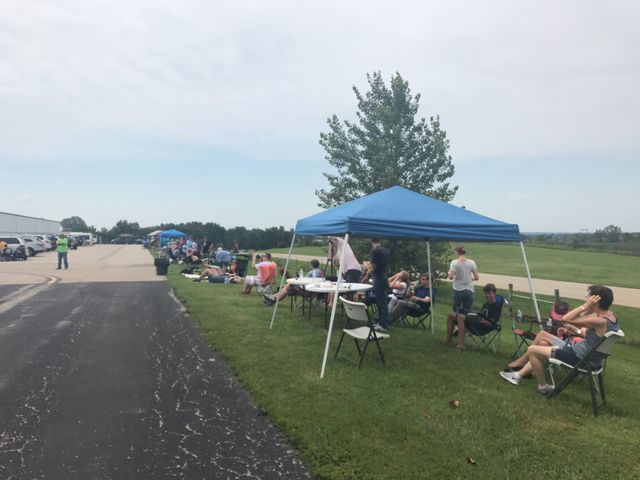 BOONVILLE – Eclipse viewers gathered at the Boonville Airport to watch the total solar eclipse in a point of 100 percent totality. People from around the world traveled to mid-Missouri for the best eclipse watching experience.

“I’m from Liverpool, England. We love the United States and have been here a lot for vacation and obviously the eclipse was a bonus,” Rob Johnson said. “I’m an amateur astronomer and have been interested in it since I was five years old.”

Tents and RVs lined the airport parking lot. Families set up tents and many individuals brought eclipse viewing gear such as telescopes and cameras to capture the once-in-a-lifetime event.

Boonville was not the original viewing destination for many people that watched the eclipse at the Boonville Airport. Many eclipse viewers initially planned to go to St. Joe, MO but bad weather caused harsh viewing conditions.

“There was more cloud cover there than here so we trekked it up to Boonville,” Paul Wilkes said. We are hopeful to chase some blue skies.”

Optimistic eclipse viewers went to Boonville in the hopes of finding clear skies. Minutes before the expected time of totality the weather in Boonville took its own turn.

“The clouds came in thick and we thought maybe we had missed our chance,” eclipse viewer Tim Morgan said. “Then just moments before totality came the clouds cleared away and we saw one of the most amazing things I have ever seen in my life.”

Watchers reacted to the eclipse with gasps and excitement. Morgan summed up his viewing experience at the Boonville Airport.

“It was a kind of light that I have never seen before and to be with these people and share this experience was very exciting,” Morgan said.