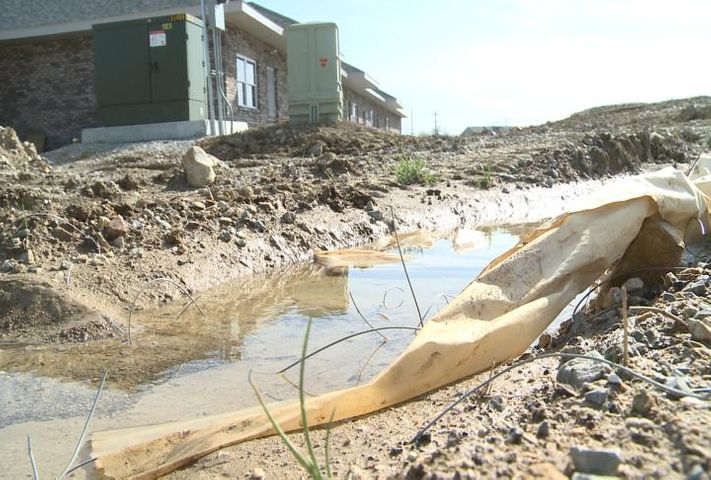 COLUMBIA - Construction workers at the future site of Bright Start Academy took advantage of the sunny weather Thursday to catch up on work missed due to severe rainfall over the past week.  A worker with Fidus Construction, the company working on the project, told KOMU 8 News severe weather over the past few months has delayed the project by one to three weeks.

Workers explained that as heavy rainfall hit the mid-Missouri area, it flooded the dirt and mud surrounding the future pre-school. According to workers, the wet mud made it impossible to find sturdy footing, drive construction vehicles, and use ladders.

Ray Belt spent Thursday laying cement for walkways around the pre-school.  He said anyone in construction knows that their work is determined by the weather, but others often do not realize it. "It ain't no fun feeling. Just like tomorrow it's supposed to rain, we don't know if we'll be able to work tomorrow cause of the rain. We try to put in longer hours, work a little faster," he said.

Belt has been with Fidus for 8 years, and he said this year has been one of the worst when it comes to weather.  "It adds a lot of stress. You work forty hours one week, and the next week you work one day, you just never know," he said.

Construction workers' pay checks also take a hit due to weather.  Belt explained, "Sometimes you just have to let some bills slide by cause if you can't work you can't pay."

Ray Bena with D&D construction, a subcontractor for Bright Start, spent Thursday putting up siding on the building. He told KOMU 8 News, "You can't work in a thunderstorm and usually there's some thunder to come with it, so its not very feasible to get up on a ladder or walk board, and then that pushes us behind and we have to crash to get it done in a timely manner. We've probably had four days off because of rain."

Director's with Bright Start Academy told KOMU 8 News they are not sure at the moment if the pre-schools opening will be delayed.  KOMU 8 will continue to check in with Bright Start and update the story as information becomes available.