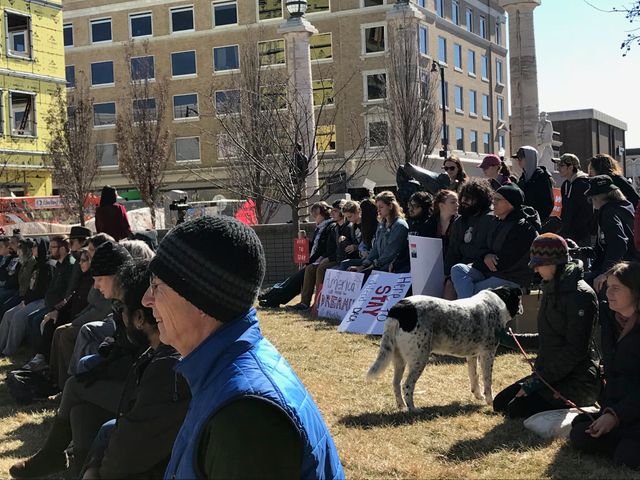 The future of DACA has been in the headlines since last September, when the Trump administration announced the expiration date for this Obama-era program. Congress has not been able to pass a bill, as President Trump hoped, and federal lawmakers are still debating over a fix for DACA and other immigration policies.

There are 3,300, or about 0.5 percent of, DACA recipients residing in Missouri as of September, 2017, according to United States Citizenship and Immigration Services.

Ana Garcia was born in Mexico and brought to the U.S. undocumented in 1999 at the age of six.

Her family moved to Missouri from California, the first stop of her family’s journey, after her father got a job. She said they were the first Mexicans to come around.

“There was a bit of a pushback, which is understandable,” she said. “As a child, I saw that people were scared, and people weren’t happy that there was this change coming.”

She’s never been a victim of discrimination, but she’s heard other people’s stories.

“‘Don’t speak Spanish. This is America.’ You know, comments like that,” she said.

Her little brother who is an American citizen was insulted at school for her situation as an undocumented immigrant.

“He’ll hear from time to time like, ‘They really need to build that wall. They need to kick all the Mexicans out,’” she said. “I know for him it was hard.”

But the school stepped in to take actions, just like her school did for her a long time ago. She said she was the first Spanish-speaking student enrolled in the city’s public school system, and her arrival prompted the schools to consider offering English as a Second Language (ESL) programs.

“That support to help the Hispanic community grow is definitely there,” she said. “The support comes from the schools, from our public health, so I’m really happy that I’ve gotten to witness that.”

Garcia said since the introduction of the program in 2012, she has gone through the DACA renewal process three times, which takes place every two years and requires her to pass a background check, renew her driver’s license and pay fees each time.

She said it was tiring to go through the process, but she wasn’t that “anxious” and it wasn't as “frustrating” until last September.

“Sometimes, some days, I don’t even wanna turn on the TV,” she said.

She said her community experienced some emotional peaks and valleys with her as well.

“It’s a small community, so everyone knows each other. So, for people, it almost came as a surprise that this is my situation,” she said. “For them, I was just another American—people thought that I was born here, I grew up and I was involved. So, for a lot of them, it blew their mind.”

22-year-old Columbia resident Devin Grayson is the head organizer for Sunday's rally. He moved to Missouri from Ohio in 2011. He said he decided to take a step up for Dreamers because of what has been happening around the nation recently.

“Over the last like 20 years, people have been more accepting of immigrants and of Hispanic community, but in the past like five years, specifically—kind of the shorter time scale, they’ve gotten a lot less accepting,” he said.

Grayson said it only took him two weeks to organize the rally, and he was surprised to see over 500 people express their interest to attend on Facebook.

Local groups that sponsored the rally include: Mid-Missouri Fellowship of Reconciliation, Mid-Missouri Peaceworks, CoMo for Progress, and MU's Association of Latin@ American Students.

Two 4th Congressional District Democratic primary candidates, Renee Hoagenson and Hallie Thompson, also showed up at the rally. They both support the clean DREAMER Act, which is cosponsored by 195 Democratic and five Republican U.S. representatives. It would grant permanent resident status to DACA recipients on certain conditions.

Garcia said she feels she is “stuck in this limbo.”

“I wanna finish college. I wanna buy a house. But do I really think about those stuff? If there’s any slight chance of being deported and sent to Mexico?” she said. “And the reality is I don’t even know how to plan for a future in Mexico, either. Because although it’s the country that I was born, I don’t really know anything about Mexico.”

She said her personal deadline to renew her status next year gives her more anxiety than March 5.

“Because if nothing gets solved before then in 2019, I lose my status and my protection,” she said.

Hallie Thompson said, “March 5 is gonna be really important, and we need to make solutions, but we also need to know that those solutions can’t be partial. They can’t be something that we do just because we are on a timeline. They have to be real, long-term, purposeful solutions.”

Renee Hoagenson said, “Considering the tendency of this president and this Congress to go back and forth, it’s hard to say how realistic this is, or how much of a fear it should be. But it seems a sad shame, and it seems wrong to continue to manipulate people for politics.”

Congresswoman Vicky Hartzler, R-MO, sent KOMU 8 a statement pointing to a bill she supports, which would let DACA users apply for renewable permits to stay in the U.S. for three years under certain conditions:

“We need to resolve the DACA situation as soon as possible. This uncertainty is not helpful to these young people nor beneficial to our nation. I have cosponsored legislation to give DACA recipients certainty while also securing the border, reforming our immigration system to provide better security, and encouraging legal immigration for those who want to come to America. I am hopeful we can move forward with this legislation so this issue can be resolved.”