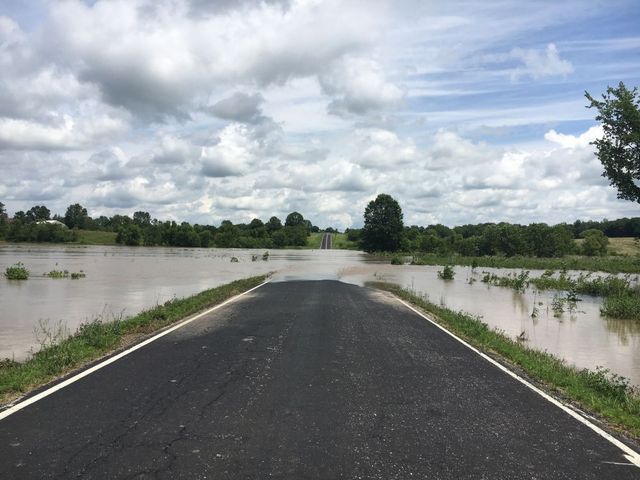 Flooding from the Middle Fork Salt River over Route DD.

MACON - No injuries have been reported in the massive flooding that occurred in Macon Wednesday and Thursday.

This area along with other parts of Northwest Missouri received between three and 11 inches of rain.

A driver on Business Highway 36 drove into elevated water over the roads last night, but authorities were able to help the man out before he drove too far.

These flooded areas can be deceiving to drivers at night and Director of Macon County Emergency Management Matthew Chambers urges drivers to be careful in situations like this.

"I say turn around and find a different route. You might think you can get through it, but you'll get down that water so many feet, catch the current and be swept off the road. Or the road may just not be there anymore with a culvert is swept out or a road that's swept out. You might find yourself in a hole where your entire vehicle is underwater," Chambers said.

Areas on Business 36 and Route DD were still flooded this afternoon. The rain made the Middle Fork Salt River flow above Route DD about 3 feet.

Macon resident Nick Muncy says this type of flooding is a rarity.

"It was definitely the worst than what we've had in a long time. Probably since a storm in 1993. My pond came up about five feet," Muncy said.

According to Chambers, he believes Macon County's damages could be enough to qualify as a disaster by FEMA standards.

If anybody has any damage to their home from flooding, Chambers says you can email him at director@maconem.org so they can look at it. You can also get ahold of Macon County Emergency Management on its Facebook.