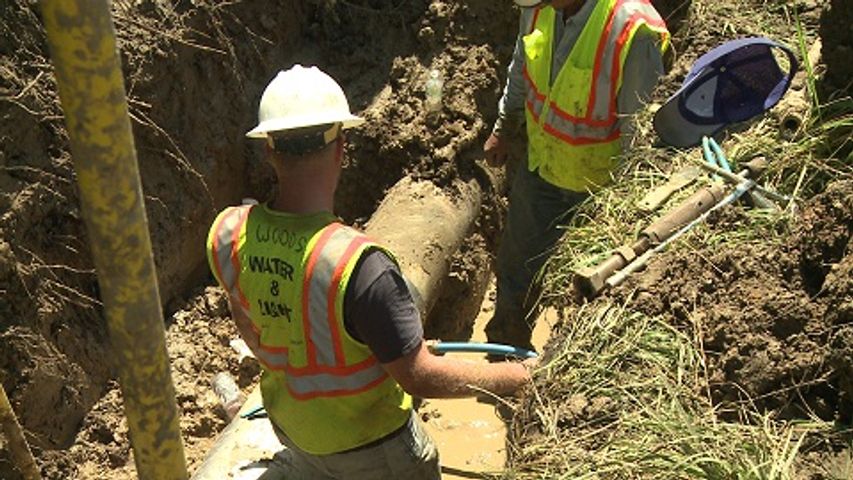 COLUMBIA - Employees with Columbia Water and Light worked Wednesday to fix a water main break off Ballenger Lane. Crews indicated the main had been hemorrhaging water for weeks and new parts were needed for the repair.

The main off Ballenger Lane is one of nearly 200 that have broken since June. Compare that to the 60 that needed repair from January to June. Utility Service Specialist Connie Kacprowzic said in year's prior, Columbia Water and Light responded to an average of two water main breaks per week. That number is now more like 20 a week.

Environmental Supervisor Blaise Brazos added that repair crews for Columbia Water and Light have worked overtime to fix water mains in this summer's historic drought and mains are fixed in order of how much they are affecting residents or businesses.

"There've been times in the spring, summer of other years where I've had none, no calls at all in two weeks," Brazos said. "I've been out five, six, seven hours every night for the last two weeks."

Brazos said soil in Columbia has a high clay content which can shift when there are drastic temperature changes. The extreme heat and lack of moisture in the soil contributed to the high number of main breaks this summer.

"It is drought-related and it's most likely the soil shifting as it dries, pushing pipes around... allowing them to corrode and break open, and let water out, or start a leak, and then they get worse and worse and worse."

When fixing a main, crews must shut off water and issue a boil advisory for safety reasons.