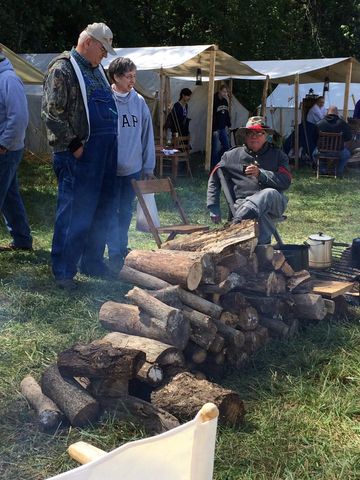 CENTRALIA - Hundreds of people took a step back in time today to watch the reenactment of one of the bloodiest battles in Missouri during the Civil War.

Next week marks the 150th anniversary of the Battle of Centralia, also known as the Centralia Massacre. To commemerate this event, the Missouri Civil War Reenactment group has put together a weekend-long event for people at the Centralia Battlefield.

In a drunken spree in 1864, Confederate troops pulled about 20 Union soldiers from a train, stripped them of their supplies and uniforms and shot them dead. The Confederate guerrillas also ambushed a nearby Union force and slaughtered almost 100 men. There were no survivors.

Kelly Noack travels with the reenactors and both her sons are reenactors. One is a Confederate soldier. The other is a member of the Union forces. She says that knowing this history is important in every person's life.

"People need to know that at one time, even though, you know, it doesn't matter what side you stood for, you did stand," she said. "And we stood on our own ground to do that. Against each other."

This morning, they reenacted the three minute massacre of Centralia and later, they did a general Civil War battle reenactment. Between battles, attendees could visit tents and tables to see demonstrations and see speakers who will teach them more about the Civil War era.

People could see the artillery used in the battles, watch cannons being loaded and fired and shop for Civil War clothing and trinkets.

Kris Lancaster is member of the Elliott's Scouts reenactment cavalry and he regularly travels all around the Midwest reenacting Civil War era battles. Although it's a hobby for him, it's still personal.

"Many of us battle because our ancestors fought in the Missouri wars," he said. "My great-great grandfather fought in one of the first battles in northeast Missouri, the battle of Athens."

Dennis Miller is another Elliott's Scouts Confederate soldier and he shared why he chose to reenact in his free time.

"The history of it... teaching mostly  young people about history because a lot of young people don't know that the Civil War even happened in Missouri," he explained. "But it was the third largest state for a number of battles and skirmishes during the war."

And the event did attract people of all ages.

The event continues through the weekend. There will be reenactments tomorrow at 11 a.m. and 2 p.m., as well as a number of other events throughout the day.