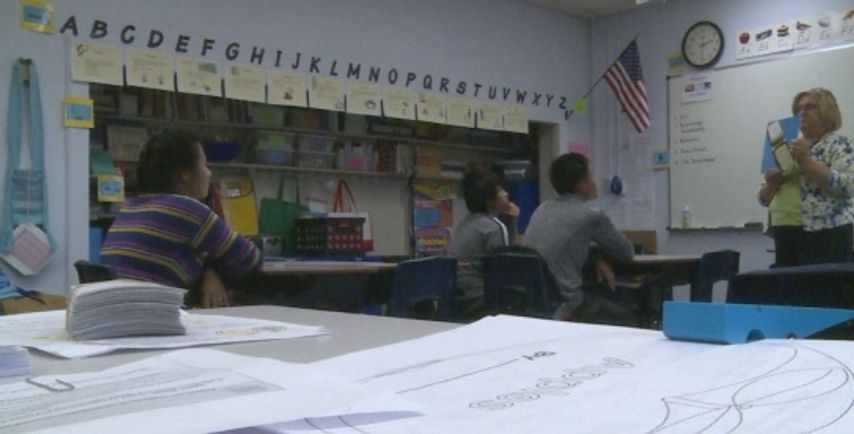 Teacher Susan Nordberg said, "It is great to play with these students."

She explained the game's simplicity, matching colors and numbers, is universal enough for her to communicate with students.

The Newcomer Center is an "immersion center" for students who recently moved to the U.S. and are new to English. The center at Douglass opened two years ago and is for high school students only. A student takes a placement test in order to determine their current "level," and then they are placed into the Newcomer Center or the English language learners program (ELL) 2.

The technique that Nordberg uses to teach the students is called receptive education. She compared the process to teaching a young child how to talk.

"I don't see the progress at the time because it happens over a great length of time and other people see it because they don't see the student everyday. So it's just like watching your young child learning how to speak," Nordberg said.

Nordberg said every student is different in how fast or well they adapt and learn English.

"Some students are very happy to be here, and therefore it makes it very easy to learn a new language or adjust to a new culture," Nordberg said. "But for those students who came here because of unfavorable reasons, it makes it that much harder."

Nordberg currently teaches three students who moved to the US from Thailand. The students are all originally from Burma, and two of them are brother and sister.  Mue Htoo,18, and Zanyi Maung, 17 moved to the US after spending time at refugee camps in Thailand.

Zanyi feels lucky that he is able to get an education in the US.

Mue Htoo said although she misses her friends and the food back in Burma, she does not miss living in the crowded refugee camps in Thailand.

The two went to school at the refugee camps, but Mue Htoo said she did not learn a lot at the camp schools.

Khaly Hussein was a student at the Newcomer Center last year. According to Nordberg, Hussein's English has improved a lot since her first day in the center.

She is originally from Kenya and stayed at a refugee camp with her mom, dad and her five brothers and sisters before moving to the US. She said she remembers the wars in Kenya.

"It's not like war like big wars but like some people came at the night when you sleep in your house and they kill people," Hussein said. "We were very scared. You can't sleep at night because you're worrying about they come and open the door."

Her transition was challenging because of the vast difference in cultures.

She said, "Learning English was the most hard for me. I tried my best to learn English and now I can speak a little."

Senad Music is the office manager at the Refugee and Immigration Services Center in Columbia. He was also a refugee and is originally from Bosnia. He moved to the US in 1996.

He said the circumstances and reasons why students move to the US plays a big role in their learning. He said refugee students have more challenges than immigrant students.

"It is a huge difference because refugees are coming here not because they like to come here, they fled from their home," Music said.

Music related the challenges of refugee students have when learning English in the US to the fact that many of their teachers in the refugee camps, are volunteers.

"You have to look at different regions. Some refuge camps don't have education. They are just volunteers, not teachers and they don't know how to really communicate and teach the kids," Music said.

Nordberg also agreed that refugee camps did not have the proper education resources to teach students, and many times the classrooms are filled with 50 or 60 students and only one teacher.

"I know that some of my students told me that the teacher would put everything up on the board and they would copy it and then they would memorize it and that was their lesson," Nordberg said.

According to Nordberg, it takes about 12 years to be truly familiar and bilingual in another language. So when students come to the US when they are 15 or 16 and older, they do not necessarily meet the testing requirements.

Some students who come from refugee camps, are illiterate in their native language and don't get suitable education at the refugee camps, making learning a second language much harder.

Other factors in their challenges come from the overwhelming changes the refugee students and their families are faced with but are not prepared to assess.

Martha Quentin is the education coordinator at Refugee and Immigration Services. She also agreed that refugee students have more trouble adjusting to the US culture and education system. She said those students are in a special circumstance and do not have the proper transition that is needed to adapt to schools in America.

She also said teenage students have more trouble because of their age.

"You know life is a struggle because they are transitioning from the children to the adult stage. They have their own difficulties," Quentin said.

Quentin said parents of students from different countries many times count on them to be their translator and know the "American" culture. Often that becomes a burden to the students.

She wishes a transition orientation and program existed for refugee and immigrant students to attend before going to public schools.

Nordberg said she wants an ELL school that could become a bigger picture of the Newcomer Center. An ELL school would have core classes taught by an ELL content area teacher.

"Money is part of the reason we don't have one," Nordberg said. "They want to build more schools before they would be build a center like this."

Students typically stay in the Newcomer Center for about one or two years until they graduate out of the program.