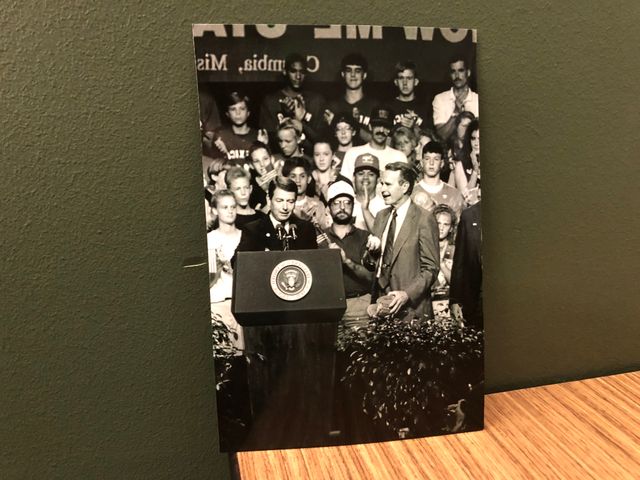 COLUMBIA - Former President George H.W. Bush made his final rest in Texas on Thursday, but his trip to the "Show-Me" state will not be forgotten.

The 41st president died in Houston at 94 on November 30 and for the past week people around the country have been honoring the late commander in chief.

President Bush came to Columbia in July of 1992 to be the keynote speaker at the Show-Me State Games. Mary Anne McCollum, who was the Columbia mayor from 1989 to 1995, said the city was filled with excitement.

"This just added to the whole atmosphere to say, hey we are on the map with our Show-Me State Games... we have the president coming," she said.

McCollum had the privilege to spend private time with the president prior to the opening ceremony. She and Governor John Ashcroft were taken by secret service to the holding room and were told they had to stay there until the ceremony began.

"It was an interesting conversation to say the least," McCollum said.

"It was hard to believe by the time that we walked out of there and got on stage and he was introduced as the president of the United States and I'm thinking I just had the most normal conversation with my father," McCollum said.

Ken Ash, who was the Show-Me State Games Assistant Director at the time, described President Bush as "down to earth."

"We lost a good man and a good person. That's the way he came across," he said.

Ash said every seat was filled at the Hearnes Center that summer day.

"Everyone was thinking what in the heck. It's going to be the biggest opening ceremonies we are ever going to have," he said.

"There was a lot of work that went with it. Schedules had to be changed, the opening ceremonies is usually 6:00 p.m. to 7:00 p.m. in the evening, but they wanted to make it an afternoon event right in the middle of all the activities so the president could get on his way and get out of here," he said.

Ash said the major changes were definitely worth while.

"He was fatherly and just a good person," he said.

McCollum said her 20 minutes with President Bush is at the top of her most memorable moments list as mayor.

"Our country and the world has lost one of the last few members of the greatest generation of a true patriot, a true gentleman, someone who really really made a difference in our lives," she said.