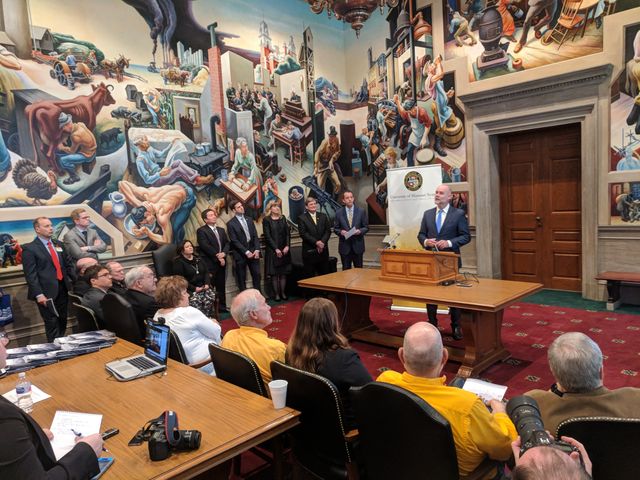 JEFFERSON CITY - University of Missouri System administrators and a consulting firm founder went to the Capitol Tuesday to discuss the UM System's impact on Missouri's economy.

The consulting firm Tripp Umbach reviewed the UM System's economic and community impact for the 2017 fiscal year. Paul Umbach, the firm's founder, said the UM System created an annual economic impact of $5.4 billion in Missouri from the roughly $400 million in taxes the System received. As a result, the UM System had a 13-to-1 return on investment ratio.

The firm also found that the UM System supported 61,105 Missouri jobs and created $244.4 million in local and state tax revenue in the 2017 fiscal year.

The presentation included speakers from the UM System, the Missouri Chamber of Commerce, the Missouri Department of Economic Development and MU.

Mark McIntosh, the UM System Vice President for Research and Economic Development, mentioned examples of economic successes in the UM System, including UMKC's $8 million grant to research opioid use as well as the Show-Me-Select Replacement Heifer Program.

"We touch each county through our educational activities, through our workforce development, through our research and our innovative technologies and especially through our community engagement," McIntosh said.

UM System President Mun Choi said being open about the UM System's impact and economic developments will benefit the System.

"I think it's going to be the university sharing with our legislators and the citizens of Missouri the value that we bring," Chun said. "We have to continue to bring value, otherwise, just the president and the leaders coming in and talking about the value is not going be sufficient."

Sen. Caleb Rowden, R-Columbia, attended the presentation and said he was surprised to hear a statistic that one in 50 Missouri jobs is related to the UM System.

"People really forget about the University of Missouri Extension and really the broad implications it has across the state," Rowden said. "It's a message that resonates in 114 counties and everywhere in between."