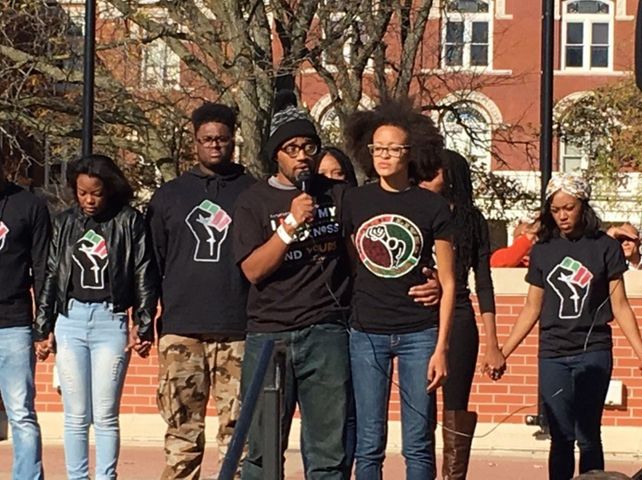 The reports of Russian meddling in the MU protests appeared in a "Strategic Studies Quarterly" study titled "Commanding the Trend: Social Media as Information Warfare."

According to the study, a Russian propaganda Twitter account spread rumors of a violent KKK presence on the MU campus during the protests of 2015, sparking fears among local residents and the campus community.

The Russian account posed under the name "Jermaine" and used the handle @Fanfan1911. The account used the trending "#PrayForMizzou" hashtag to send false warnings that the KKK was wreaking havoc on the MU campus on the evening of Nov. 11, 2015.

The account tweeted, "The cops are marching with the KKK! They beat up my little brother! Watch out!" Attached to the tweet, which received hundreds of retweets, was a photo of a bruised and beaten black child.

According to the report, the photo was actually a picture of a black child beaten by police in Ohio more than a year earlier.

The rumor spread like wildfire, and it was soon taken up by people on campus, including student body president Payton Head, who warned students to "take precaution. The KKK has been confirmed to be sighted on campus."

The "Jermaine" account and other Twitter users continued to tweet with the #PrayForMizzou hashtag to chastise the media for not "covering the racists creating havoc on campus."

Head later apologized via Facebook for spreading misinformation and inciting fear, two things the study says the Russians intended to do with the fake accounts.

According to the study, the "Jermaine" account and its followers were all linked to about 70 bots that automatically retweeted those accounts' tweets. The tweets also used all of the moment's top trending hashtags, including #PrayForMizzou--an attention-grabbing tactic the study calls the "trend-distribution technique."

"The narrative was set as the trend was hijacked, and the hoax was underway," Prier said.

MU spokesperson Christian Basi said university officials and law enforcement suspected, even at the time of the protests, that the rogue tweets were not published by members of the MU community.

"We knew at the time that we were dealing with individuals outside of the university, individuals whose only goal was to create divisiveness and to create a chaotic scene," Basi said.

According to CNN, Russians also played off of racial tensions in Missouri following the protests at Ferguson. Facebook "Black Lives Matter" ads were geographically targeted at Ferguson and were linked to the Russian government, which purchased the ads to sow political discord.