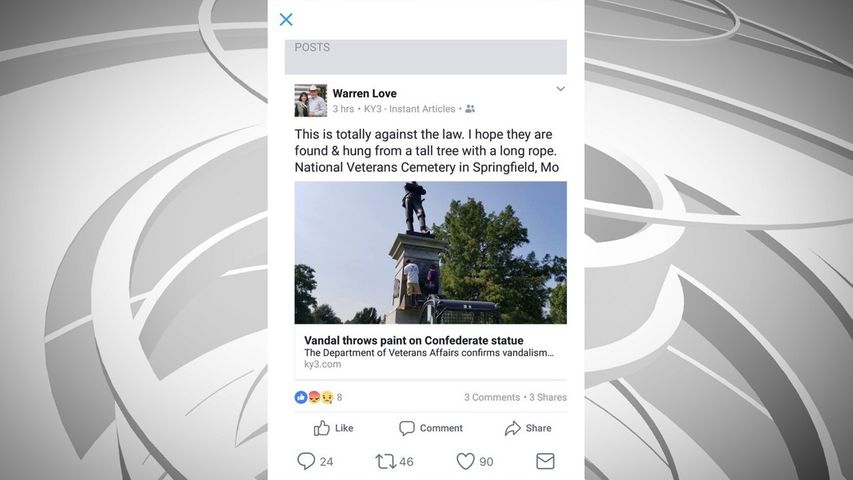 JEFFERSON CITY -  The House Ethics Committee took the first steps in disciplinary proceedings toward Rep. Warren Love, R-Osceola after he posted on Facebook calling for violence against people who vandalized a Confederate statue at Springfield National Cemetery.

In his Facebook post, Rep. Love wrote, “This is totally against the law. I hope they are found & hung from a tall tree with a long rope.”

Some feel Love's comments called for a lynching.

Love has since apologized for the post alluding to lynchings, calling his rhetoric “colloquial” and “cowboyism.” He said he meant to say the vandal should be punished to the “full extent of the law.” He said the post has not been deleted.

On Monday, the committee combined the ethics complaint filed by Gail McCann Beatty, D- Kansas City and formal filing into a single measure. They will move forward with a public, preliminary hearing sometime next month.

Rep. Love’s comments received backlash on social media from both sides of the aisle, also citing recent social media posts from Sen. Maria Chappelle-Nadal, D-University City. She sparked controversy in August for writing “I hope Trump is assassinated” in a personal Facebook comment.

Gov. Greitens wrote on Twitter, “Leaders in MO need to do better & I don’t think the Sen or Rep should be representing the people of MO; both should face same consequences.” He later clarified with the St. Louis Post-Dispatch Rep. Love should resign his legislative seat.

U.S. Sen. Claire McCaskill joined in condemning Chappelle-Nadal’s comment and called her to resign as well.

Despite calls to step down, neither Chappelle-Nadal or Love have resigned. Chappelle-Nadal said her comment was out of frustration with the “trauma and despair” President Trump is causing.

Rep. Shamed Dogan, R-Ballwin, the only black Republican in the Missouri Legislature responded via Twitter, “Vandalizing property is wrong, but hoping for people to be hung/lynched over it?? Way over the line!!”

Republican Lt. Governor Mike Parson said on Twitter Love’s comments are “unacceptable and inexcusable” but did not ask him to resign. In a statement, Parson said, “no elected official should call for violence against anyone. I agree with Governor Greitens that Representative Love must face the consequences for his actions.”

Parson did demand Chappelle-Nadal step down for her comments.

This isn't the first time Love has made controversial statements regarding race.

In February, he shared an article to his Facebook page that called Abraham Lincoln “the greatest tyrant and despot in American history."

Love was elected in 2012 and is serving his third term in the state legislature. He serves District 125 covering Cedar, Benton, St. Clair and Hickory counties. He told KOMU 8 News he is seeking reelection in 2018.