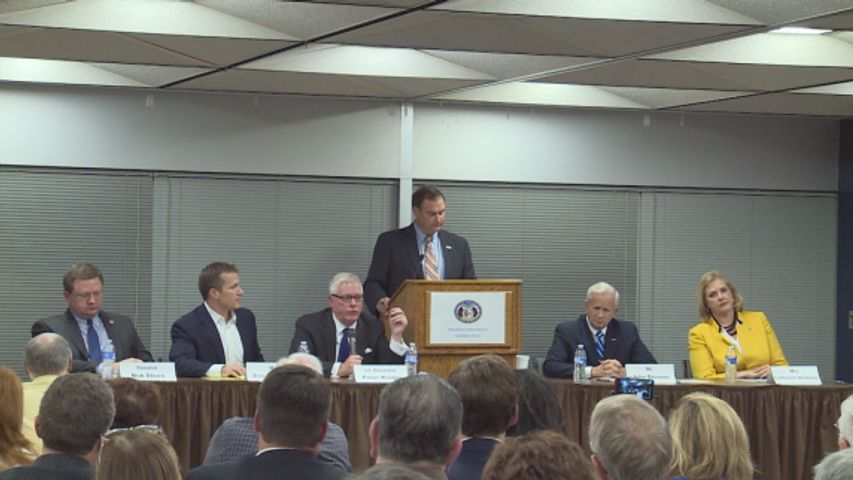 Senate Majority Leader Mike Kehoe (R-Jefferson City) was the moderator for the debate.

Pat Rowe-Kerr, an audience member at the debate, said she wanted the candidates to talk about increasing wages for state employees. Rowe-Kerr is the former Missouri Veterans Commission ombudsman and supports Greitens' campaign.

“I support veterans in many different aspects of their lives, and I wanted to listen to the compliment of our candidates tonight to see where they are on various issues,” Rowe-Kerr said.

The candidates answered questions from a range of topics including agriculture, economic development, transportation funding, government control and education funding.

Cole County Republican Central Committee Chairman Ron Fitzwater said Peter Kinder is the current frontrunner for the Republican candidate according to recent polls. However he said this might be because voters simply recognize his name.

“I would not put a lot of stock in the polls until we get into the first or second quarter of 2016 when voters get a chance to see the five candidates and get a little bit better feel where they stand on the issues,” Fitzwater said.

Fitzwater said he thinks transportation in Missouri is one of the important topics the candidate for governor needs to address in his or her campaign.

The audience was not allowed to ask questions. The committee compiled six questions to ask before the forum began.

The Associated Industries of Missouri and the National Federation of Independent Business also co-hosted the debate.