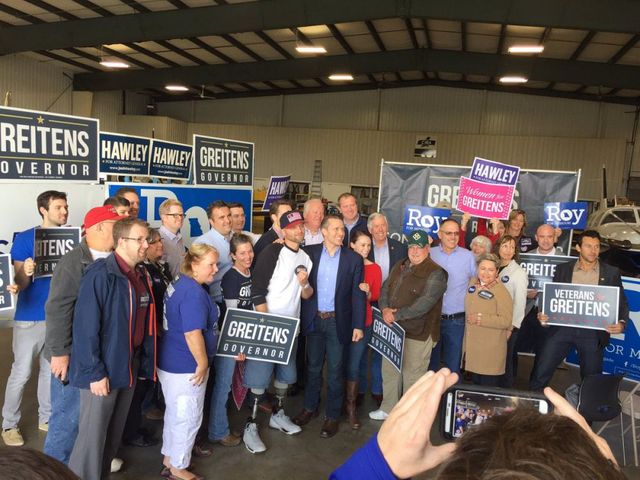 COLUMBIA — Missouri Republicans are holding a statewide series of rallies on Monday, the day before the election.

The first was held Monday morning at the Columbia Regional Airport.

The Republican candidates traveling throughout the state are Eric Greitens for governor, Roy Blunt for U.S. Senate, Mike Parson for lieutenant governor, Jay Ashcroft for secretary of state, Eric Schmitt for treasurer and Josh Hawley for attorney general.

Roy Blunt was not present at the Columbia rally. All of the other candidates who were at the rally spoke briefly to the crowd.

Greitens spent the most time talking. His message was urging his supporters to go out and inform other voters on Election Day.

Greitens said he believes more and more people have been joining his campaign and that he has momentum.

"They recognize what's at stake," Greitens said. "We're going to be fighting for every single vote all the way until the polls close tomorrow."

He also contrasted himself to his opponent by saying he is the non-corrupt option since he doesn't have a political background like Democratic candidate Chris Koster.

"My opponent, Chris Koster, has been involved in politics for over 22 years. This is guy who's been on the front page of the New York Times. He was the most corrupt attorney general in the country," Greitens said.

He said Koster is too closely linked to Washington Democrats.

"He's been endorsed by Barack Obama because he wants to expand Obamacare. Hillary Clinton's come in and given him half a million dollars for his campaign. People recognize that the status quo isn't working and they're tired of crooked, career politicians like Chris Koster," he said.

He once again pointed out he's a Navy Seal and a small business owner.

"I'm ready to take Missouri in a new direction,"Greitens said. "We're excited that so many people are standing up and joining our mission."

When asked multiple times if he will be voting yes or no on Amendment 2, Greitens didn't have a clear answer. Amendment 2 relates to campaign donations and it would establish a limit on campaign contributions of $2,600 per individual candidate and $25,000 per political party in any election.

"We believe that we have to clean up Jefferson City and that's why we're standing up and saying that when I'm governor we're going to ban all gifts from lobbyists. We're going to close the revolving door between legislators and special interests and we're going to put in place term limits for every statewide office holder," Greitens said.

The rest of the rallies will take place at airports across Missouri with stops in Hannibal, Kirksville, St. Joseph, Lee's Summit, Joplin, Springfield, Cape Girardeau and finish at the Greitens for Governor office in St. Louis.