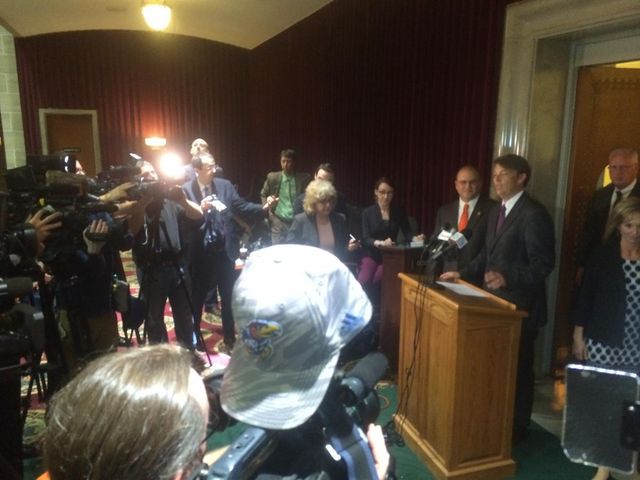 The caucus met only hours after Diehl announced his resignation as speaker following sexually charged text messages with an intern.

The House of Representatives will meet again Friday to officially elect the new Speaker of the House. Friday is also the final day of the legislative session.

In a news conference after the caucus meeting, Richardson said he does not expect the House to pass many bills because of gridlock in the Senate.

"I expect tomorrow, compared especailly to the typical last day of session to be far lighter than it normally is," Richardson said.

Richardson is no stranger to personal scandals impacting House leaders.

His father is former Minority Leader Mark Richardson, who resigned in 1997 before pleading guilty to drunk driving and child endangerment charges.

"In my time in public office I have taken to heart lessons both good and bad that you can from watching other people," Richardson said. "Those are things I remember, but I expect my dad to be very proud."

"I don't think the last five months have put the legislature and this institution in a particularly good light," Richardson said. "It's my great hope that beginning tomorrow we can get back to work and focus on improving that public perception."

"He's not a micromanager and I think that that's going to benefit him and the caucus a lot," Fitzpatrick said. "He's been a born leader since the day I met him."

Fitzpatrick said there was no opposition to selecting Richardson to replace Diehl.

He also said Richardson was in line for this position when he was named majority leader.

"Everybody anticipated he would become the speaker in 2017," Fitzpatrick said. "It's just going to happen a little earlier."

This is only the seventh time in Missouri history an acting House Speaker has stepped down during their term.