Republicans issue response to Nixon's State of the State speech 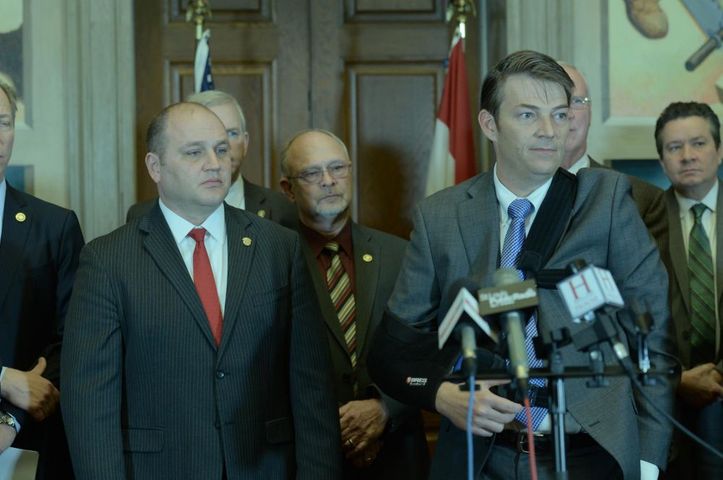 He started by thanking the incumbent governor for his 30 years of public service, but went on to outline the ideological differences between his party and Nixon's.

Views on the Affordable Care Act were among those differences. Richardson said the Republicans' views won't change on the subject.

"We will continue to oppose this president, this governor, and the Democrat party in their efforts to expand the failed and flawed Obamacare system. That opposition will not change," Richardson said.

Richardson noted the governor's ability to speak inspirationally, but said that doesn't translate to his duties at the Capitol.

"Jay Nixon in speeches, press conferences, and television commercials, is not the same Jay Nixon we see in the Capitol. Despite his many bold promises during Governor Nixon’s term in office, Missouri has continued to fall behind the rest of our neighbors, and the rest of the country," Richardson said.

Below is a full transcript to the G.O.P.'s response to the governor's State of the State address:

I am honored to offer the Republican response to the State of the State tonight.

Tonight we witnessed the last State of the State address from a public servant whose career has spanned 30 years. And while the governor and I disagree on many issues, I think it is appropriate to acknowledge and thank the service of Jay & Georgeanne Nixon to Missouri over the last three decades.

As I prepared my remarks for tonight, I spent some time reflecting on our great state and what it means to be a Missourian. As we all know, this is the Show Me State, which is a name we have earned as a people who believe not in flowery speeches or rhetoric, but instead in hard work and practical solutions.

I’m proud to say that Republicans have acted to provide solutions to many of our state’s most pressing problems. In just the past two years, the Republican supermajority has taken important steps to improve our state’s economy over the long-term. Because of these actions, and despite the governor’s objections, this year Missouri families will see their first income tax cut in nearly a century. It’s a responsible tax cut that gradually reduces taxes for every Missouri entrepreneur and family. Thanks to the action of Republicans, you will pay less in taxes.

As a Republican-led legislature, we also have stood firm in defending your Second Amendment rights. Every year Democrats file dozens of bills that would infringe on these fundamental rights. Every year we oppose and defeat them. Just last year this General Assembly defeated a proposal to enact a massive tax on guns and ammunition, and we will continue to defeat similar proposals going forward. Sometimes this body’s best work is not in what we pass, but in what we defeat.

This majority has also made great strides in protecting the lives of the unborn. Because of the work of Republicans in the legislature and because your support there are thirty percent fewer abortions a year in Missouri than there were just a decade ago. This is more than a statistic; there are literally thousands of children and people, alive today who might not be, but for Missouri’s culture of life.

Republicans have stood adamantly opposed to an ever encroaching federal government this is especially true with our health care. We will continue to oppose this president, this governor, and the Democrat party in their efforts to expand the failed and flawed Obamacare system. That opposition will NOT change.

The fact is, Medicaid enrollment is up nearly 15 percent over the last year and a half and the cost of the program has increased by almost 27 percent while Jay Nixon has been governor. It defies common sense for the governor to advocate expanding a program experiencing such exponential growth when no effort has been made to control costs.

Let me give you just one example. Prior to the General Assembly taking action, the Nixon administration made no serious effort to verify that people on Medicaid actually qualified for state assistance. This year we will pass a law requiring state agencies to fact check applicants.  Coupling these efforts with a more managed approach to Medicaid delivery will help further contain costs and increase the quality of care – something that we must demand from the most expensive program in our entire budget.

Even with the many successes of this Republican majority, we continue to face great challenges as a state. In the State of the State speeches I have heard Governor Nixon deliver, he has always had an ability to connect with Missourians from every corner of the state with inspiring words and bold promises. However, the unfortunate truth that those of us who serve in this building know is that the Jay Nixon in speeches, press conferences, and television commercials, is not the same Jay Nixon we see in the capitol. Despite his many bold promises during Governor Nixon’s term in office, Missouri has continued to fall behind the rest of our neighbors, and the rest of the country. Missourians are feeling the effects of our state’s lagging economic performance. The purchasing power of Missouri families continues to fall and poverty continues to rise.

The hallmark of this governor is talk and not action. Each January he comes to the General Assembly and promises to meaningfully engage on the challenges facing Missouri. With few exceptions, he has failed to deliver on that promise. For example, for the second year in a row, at the governor’s direction, and with promises of support, we passed an education bill to help children in some of our worst school districts access the quality education they deserve. Our efforts were, once again, met by a veto.

This Republican legislature has pledged to lead even in the governor’s absence. Because of his lack of leadership, Governor Nixon has been overridden more times than every other governor in the history of this state combined.

With or without the governor’s help, this legislature will tackle the challenges that Missouri faces. One of those challenges is improving our states infrastructure. Investing in our states’ transportation funding isn’t just a convenience issue, it’s one of economic necessity and public safety. For the farmer  who, on his way to the local grain elevator, is forced to take a 30 mile detour to avoid an unsafe bridge, or the first responder who’s response time is thirty minutes longer to reach a Missourian in need - it is a matter of protecting the livelihoods, and in some cases the lives, of Missouri families.

But Missourians don’t believe government should look to them with a hand out every time funding for one of our priorities falls short. Instead, Missourians believe we must take a long hard look at government, and the way it works and spends money, to find innovative solutions to these funding challenges.

I think we should listen to them.  That’s why, to increase infrastructure investment, I along with Senate and House leaders, am proposing we reinstitute the MODOT cost sharing program. This once popular program among our cities and counties will allow local government to work with the state to meet the infrastructure needs of their communities.

While this proposal won’t solve all our transportation problems, this investment will send a clear signal to job creators and industry that our state is making the necessary investments and improvements to our infrastructure to allow business to capitalize, expand, and grow. And we can do it without asking Missouri families for a single penny.

The public has placed their trust and confidence in the General Assembly we owe it to them and the offices we hold to improve how people feel about their state government.

We have to work together to find solutions to our state’s problems. Building a stronger economy, fixing our roads and building safer bridges, restoring the people’s trust in their government and educating the next generation of doctors, teachers, welders, and entrepreneurs are issues that we all can agree on.

While politics nationally is polarized and gridlocked, we in Missouri can and must do better. While there are critical differences between our parties and our ideals, refusing to find solutions is not an acceptable option.

It’s time for Governor Nixon and leaders in both parties, and that includes me, to stop talking, and instead get to work to begin crafting a better place live work and raise a family. The state of Missouri is strong because Missourians are strong people. We have such a very short time here; so let us not waste it. The people of this state have heard enough talking, and after all, we are the Show Me State. It’s time we get to work.

Thank you, and God Bless Missouri."