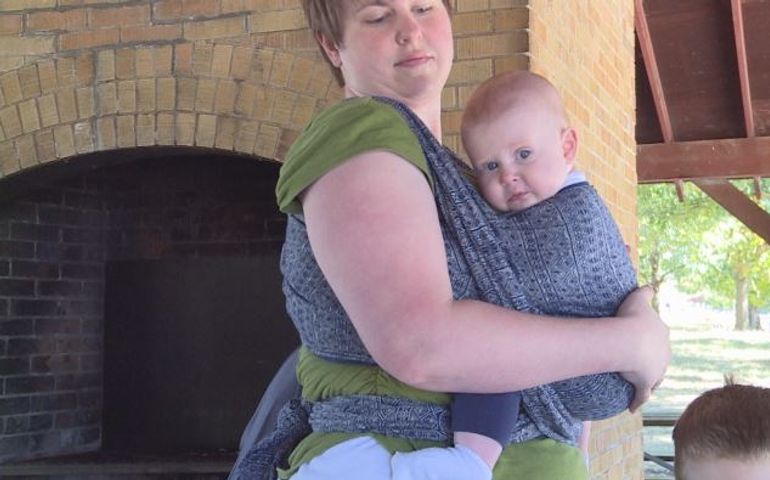 COLUMBIA - Parents and experts agree that "babywearing" is another helpful tool for parents to raise their children.

According to the Babywearing International website, babywearing is a skill in using types of carriers to keep your child close while still having your hands free. Fathers or mothers can use wraps or carriers to establish a closer connection to their children.

Megan Oberg, co-Founder of Central Missouri Babywearers said people have asked her about her choice of babywearing as opposed to other forms of baby carriers.

"A lot of times, since many people in our culture are used to strollers and the little infant seats, people want to know why we like doing it and why it's beneficial," she said. "What we find is, the main one is, it makes life more convenient for parents. If you have other children running around you have a way to meet your youngest baby's needs but also keep up with the older one."

She said there are misconceptions about the potential of spoiling the baby.

"Another question is, 'will I spoil my baby' or 'will my baby not sleep on their own if I carry them', the answer to both of those is no. You really can't spoil a baby by meeting their needs. Actually, we find that baby who have their needs met tend to be more secure and dependent. Also baby will sleep where they are comfortable," she said.

Oberg said children need to be close to their parents.

"When we meet that biological need, what we find is that their development and other ways just expand, because they already feel close and secure, they are already right next to the parent, they can feel the heart beating," she said.

Womenshealth.gov has a page that addresses the common problems parents face when breastfeeding. Oberg said babywearing has immense benefits to help parents with this issue.

"That closeness helps moms notice hunger cues a lot earlier. That closeness to being able to smell mom helps babies nurse more frequently, which increases weight gain for baby in a positive way," she said.

Certified lactation consultant at MU Healthcare, Lori Lampe, said she advocates for babywearing to her patients. She even babywears her grandchildren.

"Babywearing keeps the baby calm and secure with mom, and that's very important when it comes to breastfeeding," she said. "It really promotes breastfeeding and it keeps the mom and baby together."

Lampe said her patients have experienced better breastfeeding when their children are close to them, and research has supported this.

"The research shows that breastfed babies and babies that are close to parents with continuity are a lot more confident as adults, and even as children," she said.

She said most parents aren't hesitant about the practice, they are just uneducated about what goes into babywearing. She said the hospital developed a Tiger Tot Mommies group and, in December, the group will address babywearing.

Lampe said parents should take the time to get used to babywearing around the home first.

"Mainly is to use it at home at first so they're not out in public and feeling awkward with it. And their confidence gets built and they're willing to put the baby on and do social things, whether it's shopping or going to the zoo," she said. "I think you have to be comfortable in each one individually first. You need to establish breastfeeding and feel good about your milk supply and when the baby's latching, and then explore your wraps and be comfortable with that, and then bring the two together."

She said there are different wraps and carriers to accommodate varying ages of children, from newborns to toddlers and mothers should be education on what's appropriate.

"Follow the directions from the companies or get advice from individuals," she said.

Oberg compared her experience when she raised her child without babywearing compared to now.

"I honestly really wish that I had this back then," she said. "But I feel like I would have been able to handle that a lot better as a first-time parent, had I had that ability or that skill to deal with it. So we kind of look at it like another tool under the new parent's tool belt. And, when you're learning and adjusting to having a baby for the first time, any extra tools that could help make it easier are positive."

She said some people have misconceptions about babywearing techniques.

"Sometimes we will have members who receive comments about how old their child is when being worn. The thing that people have to keep in mind is, that if you're wearing an older child who can walk, it's that it's no different than a parent carrying their toddler," she said. "There is also another misconception that somehow this will delay the child's development and that's not what we're finding at all."

She said her members have also received comments that she said are untrue.

"People will say that is so lazy to use a carrier instead of carrying your child. But honestly when you're out and, say you have more than one child, it's a matter of safety. So having one child up and comfy and happy while you're actually able to parent the other child, whereas a parent that unfortunately had to carry one child, would have less hands to control everyone moving through the area," she said.

The Central Missouri Babywearers group has been around since 2012. It offers members a 'lending library' to try out and learn different types of carriers. It helps families to see if a certain type of carrier fits their child and avoid purchasing one that might prevent them from babywearing.

"It's beneficial, because what works for one family may not be what's ideal for the next. So when we have that much variation, it helps us better serve the people we're working with," she said.

Brittany Wilson, the co-president of Central Missouri Babywearers, used a soft-structure babycarrier (SSE), but is passionate about babywearing just the same.

"I just wanted the close bondness that makes babies feel comfortable and they're always comfortable closest to mom. So, it just makes everything a lot easier," she said.

Wilson said parents don't need to be a pro at cloth wrapping to be considered a babywearer. The carriers seen in stores work fine, she said.

Sara Burns, co-founder and president of Central Missouri Babywearers, said she shares her knowledge of babycarriers through her store, Sprouting Up. She said she encourages parents who want to explore babywearing to reach out and ask for help.

"There's so many carriers that if you went to any store you wouldn't be able to see the variety of carriers we provide in meetings," she said. "We also have so many leaders who have a variety of experiences who can help and share about them."

Burns' favorite way of carrying her newborn is to use the front-wrap cross carry.

"Carriers are like jeans, everyone has something they prefer more," she said.

Oberg said she has seen a nation-wide growth of babywearers.

"I really think that the online community has something to do with that, just because it's more visible than it used to be. Once people see it and see how helpful it is, I think it makes people interested to learn more," she said.

She said the group's Facebook page now has more than 1,000 people that are active in asking and answering questions on babywearing.