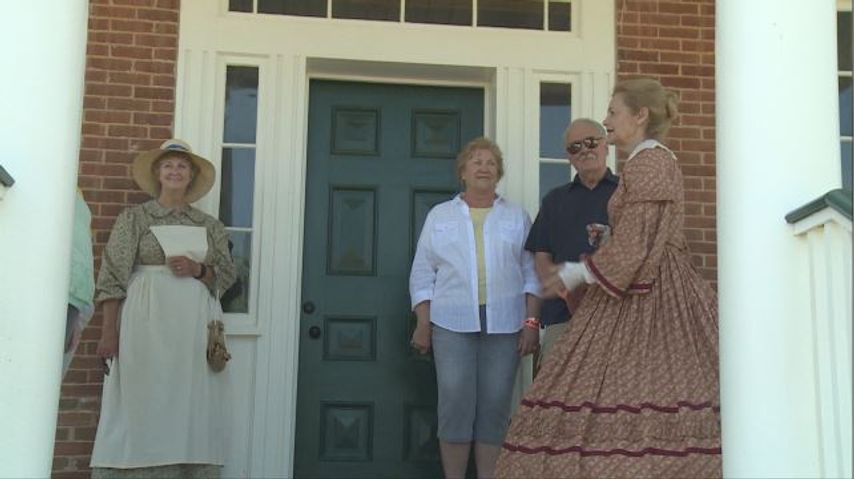 HERMANN –Residents and visitors came out Saturday and Sunday to celebrate the 64th annual Hermann Maifest and opening of the Hermann Farm and Museum.

Maifest is one of the oldest German centric festivals in the state of Missouri. The festival celebrates spring with German music, dancing, food, parades and games.

Along with the annual celebrations, the Hermann Farm and Museum opened on Saturday. The 160-plus acre of working farm was restored to provide an opportunity for the public to experience what life was like on a German farm in the 1850s.

Sunday ends the festival with the annual Maifest parade at 1 p.m. in downtown Hermann. The Hermann Farm and Museum opens at 10:30 a.m.

The warmer weather brought out the crowd, but that's not the case every year.

"Most of the time, the Maifest is usually raining,” Kuhn said. “There’s been time that people can’t get to town because the roads are closed.”

Kuhn recalls one year where East First Street “collapsed”. She said the water had washed it out.

“It complicated things in different years, but we always carried on,” Kuhn said. “We always have a parade and everybody seem to have a good time.”

Hermann sits along the Missouri River and most of the historic river town sits well above the flood plain. However, last June, flood waters from the Missouri River backed up into low lying areas of Hermann, including a barn on the newly opened Hermann Farm and Museum.

“It was, water up to the first floor of our red barn, so there was mud everywhere and we were – knew we were going to open here in May and so, it – lot of work, lot of scrubbing, but we’ve come to expect it,” Kuhn said. “We know it’s going to flood.”

According to Experience Hermann, on June 2, 2015, the Missouri River was “considerably over flood stage” and became the “worst flooding Hermann has seen since the flood of 1993”. On June 9, 2015, Hermann's highest water level point was 27.87 feet.

Although the flooding closed a few roads, the city of Hermann’s Director of Economic Development and Tourism Eli McDonald said the flooding didn’t have an economic impact on the city.

“The flooding last year, you could see, you know, it does go over Gutenberg street and some other different lots throughout town. No real economic impact because we’re used to it,” McDonald said. “We’ve been here since 1837 and the creek has done the same thing since then.”

Maifest is celebrated the third weekend of May every year.