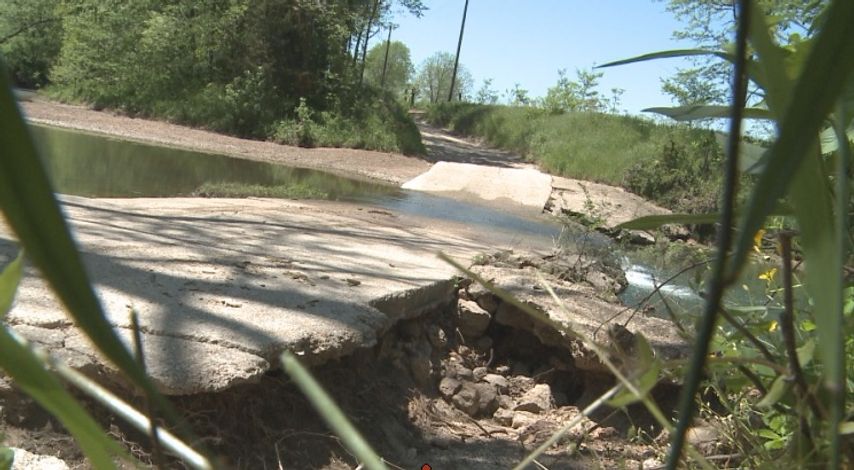 MARIES COUNTY - A low-water bridge in Maries County has one resident concerned about drivers' safety. However, the county commissioner said the bridge it no more dangerous than the other more than 45 low-water bridges in the county.

Jerry Baker has lived just up the gravel road from the bridge on County Road 408 for 13 years. He said his main concern is the hole located off to the side of the bridge.

"Both ends of it have big holes and it's cracked in the middle," Baker said. "The whole thing is deteriorated. It needs something done about it."

However, Maries County Commissioner Doug Drewel said the bridge is not dangerous to drivers.

"The bridge is solid underneath," Drewel said. "It's not going to go down any at all. It's got the weathered cracks in it, but 90 percent of the bridges have got that many if not worse."

"There's just not money in the budget for anything like that at this time," Drewel said. "We've got other projects going. We've got two other bridges going this year and in the last four years, we've put about six bridges in and with the budget and everything, the only way you can get more money is to raise taxes and I don't think anybody wants their taxes raised."

Baker said this bridge should be a priority regardless of the budget.

"It's like any budget. They have to apply for it and show the people, say 'Here it is!' If the people see that they're going to say it needs fixed," Baker said.

"Anything that has cracks in it like that, you start putting buses over it and trucks over it, it's going to cave in," Baker said. "Then, if it does, with the school bus going across it, there's going to be somebody hurt or killed on it."

"It's off the bridge way; it's on the creek side of it," Guinn said. "It's nothing that's in the path where we'd be driving. If the driver is driving there, they're probably doing something wrong."

Baker said he has also contacted the governor about this concern.