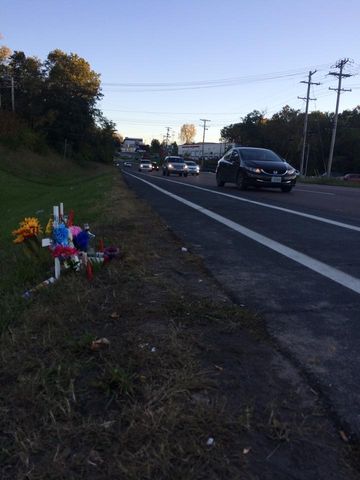 COLUMBIA - Flowers, two crosses, and a lone bottle of gin make up the roadside memorial for a pedestrian who was killed earlier this week in a fatal car crash on Rangeline Street near Vandiver Drive.

The street doesn't have a sidewalk, so people usually walk in the bike line right next to the four lane street.

Sidewalk advocate Joe Alder said he thinks the fatal crash could have been avoided if there had been some sort of curb to slow down the car.

"If there had been some type of curbing there, not even a guardrail, maybe there wouldn't have been a death and a serious injury," he said. "Maybe there still could have been a collision, a crash, but maybe the pedestrian who died would still be alive."

Rangeline Street is not in the jurisdiction of the city of Columbia, so the maintenance of that road falls with MoDOT.

Alder said the city has asked MoDOT to put a sidewalk on the street, but MoDOT spokesperson Sally Oxenhandler said the only work it can perform right now is maintenance work because it doesn't have the money.

"We are in a maintenance mode because of our funding situation," she said. "There are a lot of needs on our highway system, we can't do all the projects we would like to do."

Oxenhandler said MoDOT will work with law enforcement to look into the situation with the funding it has, but she also pointed out there were other things that caused the crash besides a lack of sidewalks on the road.

"There were a lot of factors going on in the crash," she said. "Apparently there was a car driving on the wrong direction, and a car swerved to avoid it."

Alder attended the Bicycle and Pedestrian Commission Meeting Wednesday to voice his concerns. He said the commission responded to thank him for his concerns but didn't say much else.