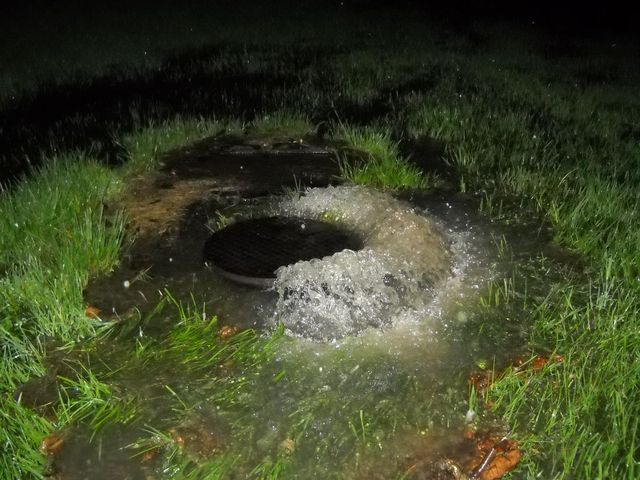 COLUMBIA - Sewer overflow is a problem throughout Columbia when there is heavy rain, according to city engineers, and some residents in the Ridgefield Park neighborhood said they are fed up and want their sewer lines fixed.

Kim Kraus has lived in her home for five years, and said the system has been a problem that whole time.

"We have four manholes in the land behind our houses, and when it rains, if we get any significant rain, the manholes erupt and spew sewage," Kraus said.

John McLeod lives across the street from Kraus and is president of the Ridgefield Park Association. He said he's seen problems at the park for seven years.

"It happens very frequently, and it's been getting worse and worse," he said.

Sewer engineers for the city said the storm water is seeping into Columbia's old, cracking clay pipes, and this extra water is causing the overflows. Steve Hunt said that some areas of the city still have the original pipes, which can be anywhere from 75 to 100 years old. He said the problem isn't unique to Columbia.

"Like most cities across the country, if not all cities, we get extra water in the sewer system when we have large rains," Hunt said.

Kraus said she has concerns even when it's not raining because of a new development being built on side of the park.

"My main concern is the city keeps growing and expanding and the sewer connections keep growing," Kraus said. "In fact we've got a development going in behind us that's going to have more than 90 units, and they're going to connect into our sewer line."

Hunt said the city has been working since 2008 to prioritize which areas of the city needed repairs the most, and actually has a specific portion of money set aside for sewer maintenance.

"A large portion of the money in our last bond issue last fall was strictly to rehabilitate our system and to reduce the amount of inflow and infiltration," Hunt said.

He said he is hoping the system rehab project will fix the problem and help avoid a more expensive and invasive upgrade to bigger sewer pipes.

"We can go into the existing system without digging, put liners in, rehab the system," Hunt said. "So far we've been successful in getting a reduction."

The project starts in 2016, and if it doesn't work, Hunt said the neighborhood would have to wait until 2021 to get a new sewer pipe.