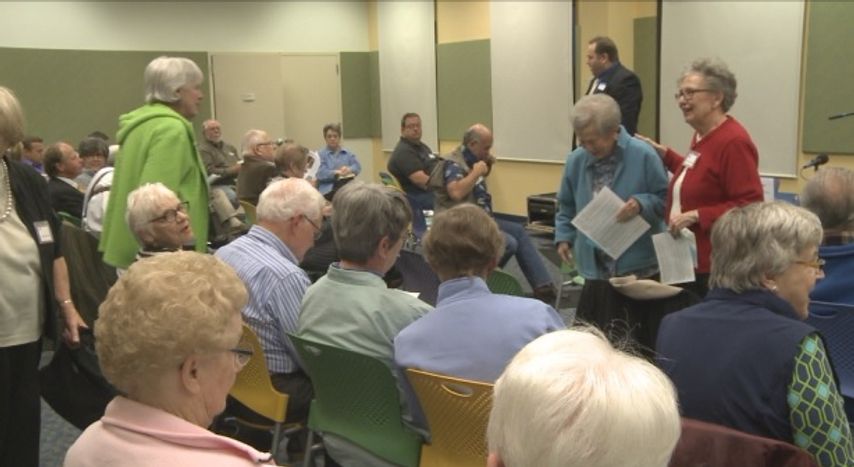 COLUMBIA - Residents packed Columbia Public Library's Friend's Room as a panel of speakers talked about the pros and cons of this year's most talked about ballot issues.

If Amendment 3 is passed, the following changes will apply:

Provisions allowed or required by Amendment 3 would influence potential costs or savings to each district. Opponents said there could be significant costs to school districts because the amendment would require new surveys and evaluation forms among other costs.

One guest at the meeting said he believes the assessment would not allow the teachers to educate the students.

"We have enough tests now that all the teachers are going to be doing is teaching to the test, and that's not right. They should be testing on education, period," Ronald Minner said.

This was the second election forum sponsored by the League of Women Voters of Columbia-Boone County this week.

Pam Springsteel, left, Renne Powell, center, and Liz Schmidt, right, sign in members of the League of Women Voters at the Columbia Public Library on Thursday, Oct. 23, 2014 in Columbia, Missouri. The league hosted a ballot issues forum with pro and con speakers on all issues.

Stephen Wyse, left, voiced the cons of Missouri Constitutional Amendment 2 while Boone County Prosecuting Attorney Daniel Knight, right, voiced the pros at a ballot forum hosted by the League of Women Voters at the Columbia Public Library on Thursday, Oct. 23, 2014 in Columbia, Missouri. Amendment 2 allows evidence of prior criminal acts, whether charged or uncharged, to be considered by courts in prosecutions of sexual crimes involving minors.

Mayor Bob McDavid attends a ballot issues forum hosted by the League of Women Voters on Thursday, Oct. 23, 2014. The organization held the forum at Columbia Public Library in Columbia, Missouri.