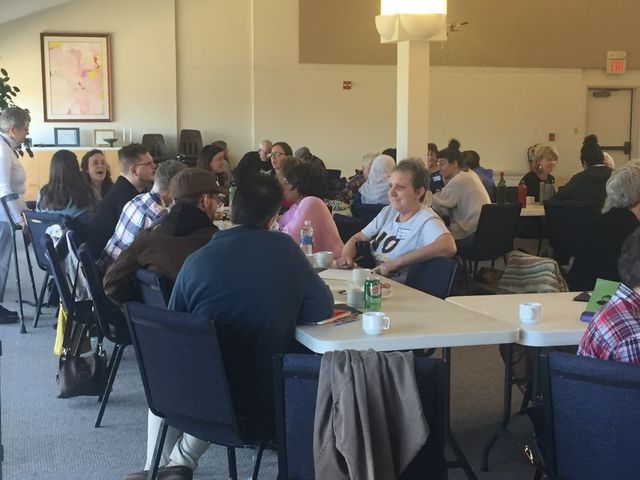 COLUMBIA - The Unitarian Universalist Church of Columbia (UUCC) and Missouri Faith Voices hosted a resistance training Saturday to educate the public on key tools and strategies for lawful resistance.

Missouri Faith Voices is an inter-faith organization that participates in social justice across the state.

Event organizer Caya Tanski-French said it was the first training session for the two groups.

"It has to do with our recent election and all of the policies that are being proposed, all of the cabinet picks that have been chosen and are being confirmed," Tanski-French said.

Tanksi-French said the session helps people learn of different methods to get involved with social activism. "One of the big things here is we're hoping that leaders come out of this training so that we can empower others to be involved".

Participants began the session by sharing their own stories on topics such as immigration, gender and racial inequality. Organizers encouraged the participants to hone in on a specific issue and to become leaders in advocating against it.

"Up until now, many of us are, 'let's do this, let's do that, let's be at this event', but there's just so much one person can do," Tanksi-French said.

Participant Polina Malikin said the task is something she struggles with.

"I struggle with [this] because I think there's so many points of intersection between different issues," Malikin said.

Malikin said the task is valuable. "Being able to focus on a specific campaign, a specific issue, or a specific problem that you're seeing in your community helps you come up with really targeted solution and really figure out who your allies are and to actually make change in a really tangible way."

One issue Malikin chose to focus on is undocumented immigrants in the area.

"I personally am an immigrant. I came as a refugee with my family under much easier circumstances than most refugees," Malikin said. "I feel like I have a real debt to repay."

Malikin attended the training session to learn about different community leaders in Columbia and how they are responding to the presidential administration. She said the training will educate her on becoming a helpful advocate for immigrants.