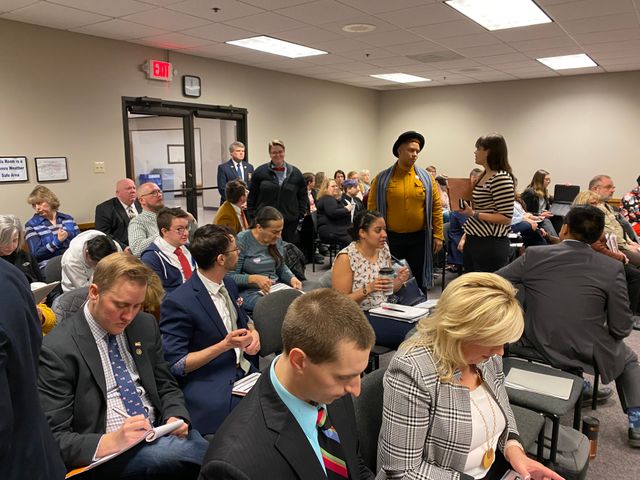 JEFFERSON CITY – People from all around Missouri and lawmakers packed into a hearing room in the Missouri Capitol Wednesday to talk about a proposed resolution to the Constitution that would impact transgender kids in school athletics.

This resolution would make it so transgender athletes would have to play on the team of the gender they were assigned at birth.

Before the change would go in to effect (if passed) it would have to be voted on by the House and Senate, and then it would be on the ballot for voter approval in the fall.

The sponsor of the bill, Rep. Robert Ross, R-Yukon, said the idea for the resolution came from concerned parents in his district.

“This is really an issue of fairness,” said Ross.

The hearing room was packed with almost 40 people waiting to speak in opposition of the bill. So many were there to talk, some were turned away because of time.

Christine Hyman, of St. Charles, is the mother of a 14-year-old transgender male (female to male) who has just begun the transition process.

“I just don’t think people understand the treatment that’s involved and what that means,” Hyman said.

She said she’s concerned about uninformed voters if this reaches the ballot in the fall.

“If you’re not familiar with the trans community, you’re going to read that and say ‘isn’t that what we do anyway?' You’re going to check that yes box,” Hyman said.

She also said the resolution is unclear on wording as it just talks about the separation of genders on both teams. Hyman is upset because she thinks this should not be an issue.

Corey, Hyman’s son, said he came to the hearing to fight for others, not just himself.

“It hurts me to see my other transgender people being hurt and discluded by it,” Corey said.

He said this proposal being discussed scares him.

“We’re just like every other cisgendered person. We shouldn’t have to go through this,” said Corey.

Currently MSHAA, the body that regulates school athletics, allows people of the transgender community to be an athlete on a team in the gender they have transitioned to. MSHAA has several regulations regarding the athlete and requires an application with letters from parents, the athlete, the counselor, etc.

According to Ross, the resolution would make it so sports like football and men's golf could not have girls play on the team as they have in the past.