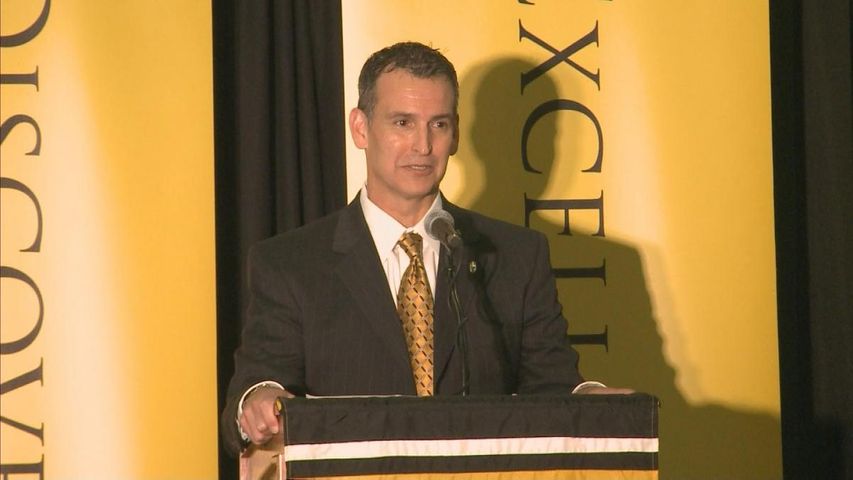 COLUMBIA - The University of Missouri's incoming Athletic Director Mack Rhoades was in Columbia Tuesday afternoon, but did not get to work quite yet.

"I knew this was a great place, and I certainly look forward to taking it to the next level," Rhoades said.

"For the first several months, I'm going to do a lot of listening and a lot of learning and really formulate my own ideas and thoughts," Rhoades said.

He said he will meet individually with every staff member in the athletic department.

"I want to get to know them. I want to know, ‘Do they like what they're doing?'" Rhoades said.

Rhoades comes to Missouri from the University of Houston, where he spent six years as athletic director. He helped raise nearly $100 million and helped build $160 million worth of new facilities, including a $120 million football stadium.

"I really believe that institution [Houston] is right on the cusp of being a power five conference," Rhoades said.

Houston is a part of the American Athletic Conference. Rhoades will now have to transition into the Southeastern Conference.

"As we all know, this is the most competitive league in the entire country, and we're going to continue to work hard," Rhoades said. "I think I will transition very well, because certainly I've been engaged in it."

Former Missouri football coach and current University of Texas at El Paso Bob Stull, who hired Rhoades at UTEP in 1998, said his former pupil was deserving of an opportunity like this.

"He's been the rising star," Stull said. "He's had other opportunities to go, quite frankly, but he's very bright and a great fundraiser. He's excellent with people."

[Editor's note: This story has been updated to reflect new information from the news conference.]