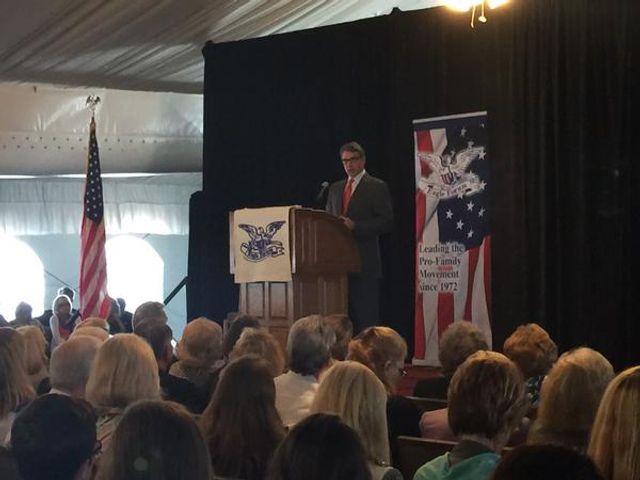 "Some things have come and become very clear to me. That is why, today, I'm suspending my campaign for the presidency of the United States," the former Texas governor said.

Two other Republican presidential candidates, Ben Carson and Mike Huckabee, also spoke at the Eagle Council Convention at the Marriott Hotel near the St. Louis Airport.

The most recent CNN/ORC poll released in late August puts Carson in second place, behind Donald Trump, with 19%. Huckabee came in at 5%, while Perry was at less than 3%, according to the poll.

Huckabee said if elected president in 2016, he plans to give Perry a position.

Carson spoke first at the event. The former neurosurgeon said he was doing so well in the polls because the American people feel as though they can't with the direction America is going.

"@RealBenCarson is not a rocket scientist, but he is a brain surgeon." He was introduced & is now on stage @KOMUnews pic.twitter.com/l6USmSdaWa

An attendee of the event, Fred Boch, had a similar view about how the public feels about traditional candidates with political backgrounds.

"I'm not implying that non-politicians may be the end result, where we end up," Boch said. "But I think the public is fed up with establishment in terms of things being done the same way all the time."

Carson slammed the Affordable Care Act, suggesting it be replaced with a health savings account that starts when a person is born and ends when a person dies.

"We've got plenty of money to take care of the problems," Carson said.

Carson also talked about a high veteran suicide rate and said the VA system is "in chaos." Regarding immigration, Carson said the U.S. has an illegal immigration problem but proposed a solution.

"We have to seal our borders from the people," Carson said.

Regarding social issues, Carson said he wants to protect the rights of Americans who believe the same things as him.

"I believe in traditional marriage, and I don't believe in killing babies," Carson said.

Huckabee was the last to speak, talking about a variety of issues in his speech. But he first joked he would not be dropping out of the race like Perry did.

.@GovMikeHuckabee says if he's elected as president, @GovernorPerry will have a position. @KOMUnews

The former Arkansas governor said it is not the role of the Supreme Court of the United States to make laws, referencing the recent decisions to uphold the Affordable Care Act and legalize same-sex marriage.

Regarding Syrian refugees, Huckabee said it is the role of the U.S. to send assistance, but said Saudi Arabia should host the refugees.

In a statement from Homer Page, the chairperson for the Boone County Democratic Party, he says that in most cases, Carson, Perry and Huckabee are people who really do not understand the U.S. Constitution.

He added that all three candidates confused people about what it really means to live in a democracy by the constitution and not by religious ideology.

Organizers of the Eagle Council conference invited 12 political candidates; half of them confirmed they'd be there.

Boch said the number of candidates doesn't make him weary of the future election.

"I'm impressed by several," Boch said. "We have some good candidates in our party, so I'm looking forward to just learn more about them and hear from them."

Ted Cruz, Rand Paul and Rick Santorum are slated to speak at the convention on Saturday.

(Editor's Note: This story has been updated with the latest information.)