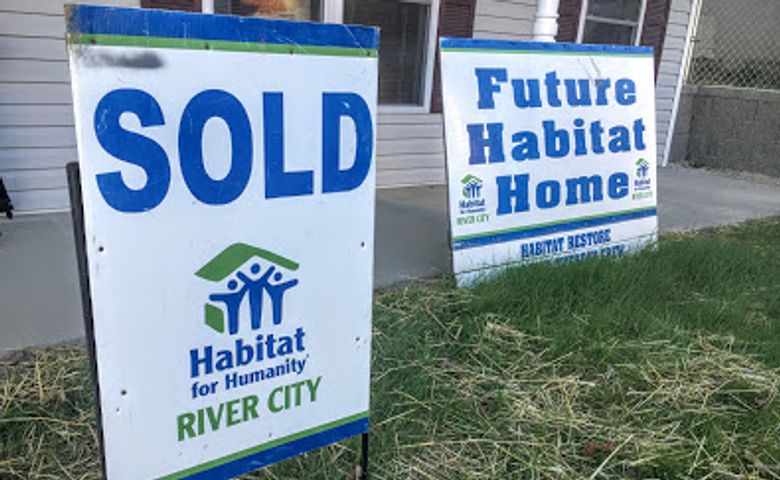 The family receiving the three bedroom, two-bathroom, two story house performed over 400 hours of labor by working on multiple homes across Mid-Missouri. The year-long project was constructed entirely by a volunteer base.

Colleen Carl, the assistant director and volunteer coordinator for the River City organization, says the goal is to reward families willing to work.

“It allows hard working families to get into their own home and become home owners,” Carl said. “They become very independent, give security for their family and do all things that home owners enjoy.”

Habitat for Humanity homes are funded by donations of money and materials and sold back at a more affordable price for families in need. Selected families buy the home with a no-interest loan, and their monthly mortgage payments will be used to build more Habitat houses.

The Habitat Re-Store, located in Jefferson City, gives families in need the opportunity to work for more volunteer hours. Jim Hofmann, the Habitat Re-Store sponsor for the project, says the store unites a variety of volunteers working together for a positive goal.

“We've got over 60 volunteers that come from all over to make the store successful,” Hofmann said. “85 percent of the money that comes in goes to build houses.”

Local volunteers also often develop positive relationships with the partner families in need after working together for over a year.

“They're out there building with us, volunteering for the retail store doing their sweat equity hours so we really get to know them.” Carl said.

In August 2016, the 100th River City Habitat for Humanity home began construction and is set for a November completion date. The home is part of a 100-day blitz build and will commemorate the organization's 25 years of service. Concord Baptist Church will hold a praise ceremony on November 10.

To volunteer with River City Habitat for Humanity, visit its website at http://www.rivercityhabitat.org.