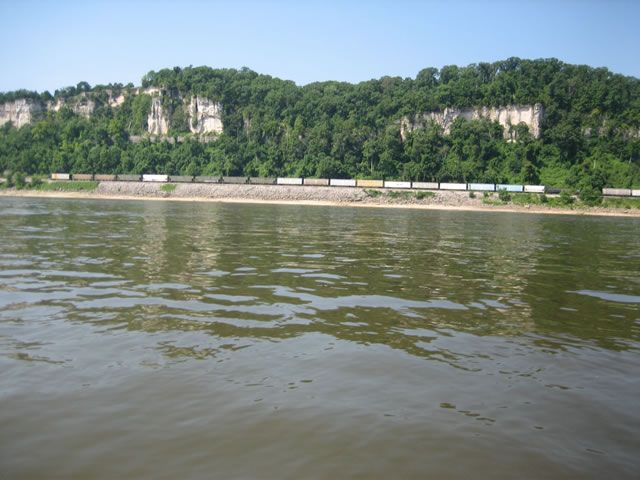 The race is a 63 mile stretch on the Missouri River that attracts athletes to kayak their way from Lamine to Jefferson City. Even though 63 miles may seem long, this race is only the preliminary test trial for the 340 mile race from Kansas City to St. Charles at the end of July.

The Missouri Relief Team helped patrol the river and provide water to the participants throughout the race. They helped with any problems the racers had.

Kayakers could choose between having any type of water craft as long as it was paddled. Many chose to conquer the challenge by themselves but others worked as a team to row the boat down the stream. Over 100 boats were present for the race.

Parent of one of the racers Hoot Mann believed that the event allows people to conquer a personal challenge by working together. "It's about fun but it's more importantly about team work. We are all here to help each push to the finish. It brings the racers together like a family when we all are out in this heat trying to reach the goal," said Mann.

While the race is only a fun event,the celebration at the end of the race featured a barbecue  that donated all proceeds to the Missouri Special Olympics. The barbecue was hosted by the Jefferson City Police Department. Participants were also awarded medals and trophies depending on how they placed.

Most of the kayakers took about eight to nine hours to complete the race starting at 8 a.m.

For more information about this race and the upcoming 340 mile race, you can visit the event website here.