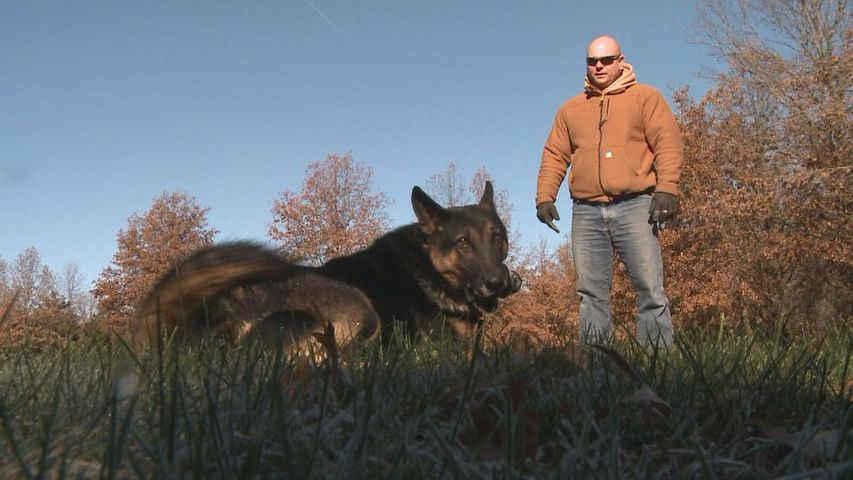 COLUMBIA - Former Columbia police officer Rob Sanders will, once again, try to get his badge back Friday morning. This time, in front of the city's Personnel Advisory Board at 8 a.m. inside the council chambers.

Police Chief Ken Burton fired Sanders more than two years ago in September 2011 after he forcefully pushed inmate Kenneth Baker in a holding cell. Nearly a year later in August 2012, prosecutors charged him with third degree assault. A Boone County judge then acquitted Sanders of that charge in October 2013.

For the first time since it all started, Sanders and his wife Amy sat down to discuss the case and what's next for Sanders.

"Trying to keep my head above water, basically," he said.

Sanders got back his police dog Fano in February of this year, but he's still without his uniform.

"It was six or eight months or even a full year of bewilderment. I didn't do much at all," he said. "I'm sure my wife will tell you, there were days she would leave for work and come home and find me still in bed."

Sanders has worked side-jobs he could find like dog trainer, freelance security officer and, this one might surprise you, cheerleading coach. Sanders was a cheerleader when he attended school in Cape Girardeau.

"It has certainly given me an inspiration I guess," he said. "I've had a blast and it's a competitive team, so it keeps me busy."

It has been two years since the incident in the holding cell and Sanders said he still finds himself on the defense.

"You react to a certain situation as you have been trained, at that point, for 18 years," he said. "You take action according to the policies and procedures and the way that you're trained."

His wife, Amy, has been right beside him since the shove occurred.

Amy admits, after first seeing the video, she was worried.

"Makes me look way bigger than he was, which isn't really the case. It was just not an accurate depiction, but you're going to get that when you only get 11 seconds," Sanders said about the video.

He said he followed his training that night.

"We are supposed to use the minimal force that we need to take somebody into custody or do whatever the goal is and in this particular case, I did exactly what I was trained to do," Sanders said.

The police department's internal affairs investigation agreed and a year later so did a Boone County judge when she found him not guilty of assault. Chief Ken Burton gave this reason for firing him in 2011:

"The personnel action that has been taken demonstrates a zero tolerance for conduct that undermines the Columbia Police Department's credibility, or that may damage the public's trust in our department."

Burton refused to discuss Sanders' case with KOMU 8 News, but would talk about the use of force and how he still has a similar opinion on the tactic.

"We need to make sure we earn the public trust by only using the force necessary to affect our lawful objective," Burton said. "Encourage officers to use any force necessary that they need to do to go home at the end of their shift, but it can't be more than is necessary."

Sanders said he disagrees with the chief's emphasis on public perception.

"At the point when we let civilians have an opinion on something they know nothing about and judge us...that's a real problem," he said.

"I'm not saying we're not going to use force, that officer has to determine in the field. The worst case scenario is the use of a firearm, and our officers, if they have to, will," Burton said.

So, if Sanders doesn't agree with the chief, why does he want his job back with the department?

"I'm in a situation where I can step back in with the dog, that I basically hand chose, to do exactly what I want and it's the quickest line for me to get back there...I'm getting close to the end of my window in law enforcement," Sanders said.

He said it would take five to eight years to become a canine handler again if he moved to a new department.

With Sanders now 43 years old, Amy said she just wants to see him back on the streets, doing the job he loves.

"Most police officers that truly are in it from the get-go, it's their life, that's all they know, that's all they want to do. It's their identity. So to take that and to take it in such a public manner for no reason, that devastated him," she said. "I've had to work a lot on my faith that good's going to happen eventually."

"I just kept thinking that somebody would look at this and fix it," Sanders said. "And here we are two years and a couple months later and it hasn't."

Now, the Personnel Advisory Board will decide if two years of waiting is enough, or if Sanders' wait goes on.

"I believe I will get my job back," Sanders said.

The board's hearing is open to the public because Sanders said he requested an open hearing.

Check out a timeline of the events surrounding Sanders' case below.