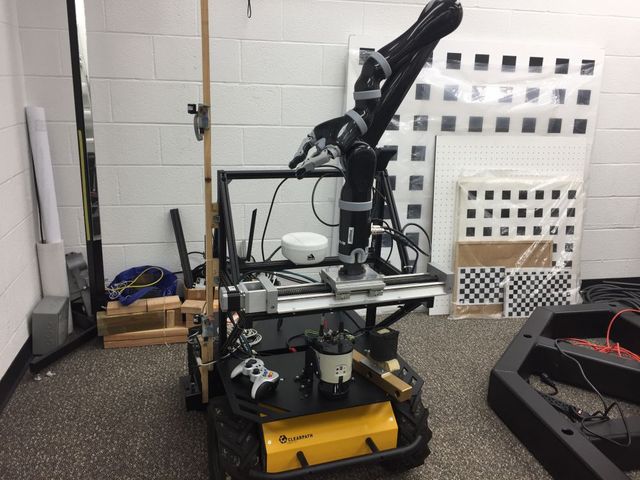 COLUMBIA — A team of researchers at the University of Missouri have created a robot, called Vinobot, that is revolutionizing the way scientists study crops.

Vinobot works to better understand how corn grows in conditions like extensive heat, droughts and floods.

It inspects the behavior of individual plants by using sensors to measure heights of the plants, temperature, light intensity and humidity.

Gui DeSouza, an electrical engineering and computer science associate professor, has worked extensively on the project. He said robots like Vinobot will aid scientists in solving one of the world's greatest problems: hunger.

"The pressures and the demands are getting bigger and bigger," DeSouza said. "The population keeps growing and we have to feed more people."

The goal is to develop drought-tolerant crops.

"We are looking at how climate is affecting plants and how plants should be developed, should be bred, and should be prepared to cope with those changes in climate," DeSouza said.

Student Ali Shafiekhani has been studying Vinobot for about three years. He said one of the reasons it was created is because humans have struggled collecting data themselves.

"We had this idea of collecting data using robots in the field, because we are aware of the difficulty that manual data collection involves," Shafiekhani said.

He said this is the third season the researchers are deploying the robot to roam the rows of the Bradford Research Field.

Another robotics system that aids in the team's research is the Vinocular, an observation tower that oversees the field and monitors the corn 24/7.

"It detects a certain area that is under stress and sends the robot to that area, and the Vinobot can collect more accurate and more detailed data."

"It can inspect how the plants react during the day to the heat, to the sun, and how they recover during the night," DeSouza said.

The team received a $20 million grant from the National Science Foundation in 2014.

DeSouza said the project's challenges include coping with wind and other field conditions.

"The biggest challenge is to provide enough data that plant scientists can have to correlate with the actual behavior of the plant," DeSouza said.

Planting season should start at the end of April or beginning of May, depending on the weather.

DeSouza and Shafiekhani said they are looking forward to advancing Vinobot in the future, including making the data-collecting process quicker.

"We are always trying to improve to make it better," DeSouza said "New research questions are going to be challenging us to develop new and better things."

He wants to remind people of the groundbreaking and meaningful work researchers are doing at MU.

"We are not just for teaching," DeSouza said. "We have to push technology like this so we can teach our students new things that can bring better economic development for our state and our country."