Rocheport holds its first ever hall of fame 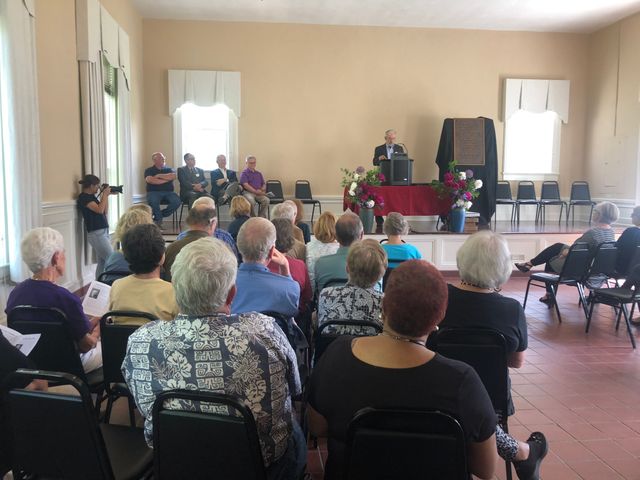 ROCHEPORT - The city of Rocheport honored two men on Sunday whose legacy has stretched across the state of Missouri.

Charles Quarles Chandler II and Dr. William Stone Woods were both inducted into Rocheport’s new hall of fame. Woods was born in Columbia, but spent a lot of his time in Rocheport. He died in 1917. Chandler II grew up in Rocheport and died in 1943. Chandler worked in banking alongside his uncle, Woods.

Bill Clark, a board member of the Friends of Rocheport society,  wants everyone to know the impact Rocheport has had on Missouri and beyond.

“Well, that’s why we’re here to let the people of the world know what Rocheport has meant to our society,” Clark said.

Bob Priddy, president of the state historical society, was honored to take part in the ceremony.

After going to school for medicine, Woods started his financial career in Rocheport. In 1882, Woods founded Kansas City’s Commerce Bank.

Eight years later, Woods helped a struggling school in Fulton pay off its mortgage. The school’s name was then changed to William Woods College.

In 1928, Chandler saved what is now known as Rocheport’s Community Hall. The building was set to be torn down, but Chandler fought to keep it open and helped refurbish it. Sunday’s event was held in the hall. The city rededicated the building at the induction.

Members of the community, descendants of Woods, administrators from William Woods, the state historical society and Rep. Chuck Bayse, R-Rocheport, were in attendance.

Priddy said it is important that towns like Rocheport not only remember their history, but commemorate it as well.

“A lot of people live in towns and don’t really have any idea of the history of that community was or the significance of it in the past, ” Priddy said.

The ceremony was the first of its kind, but Clark said it won’t be its last. He is hoping to continue the hall of fame next year with new inductees.