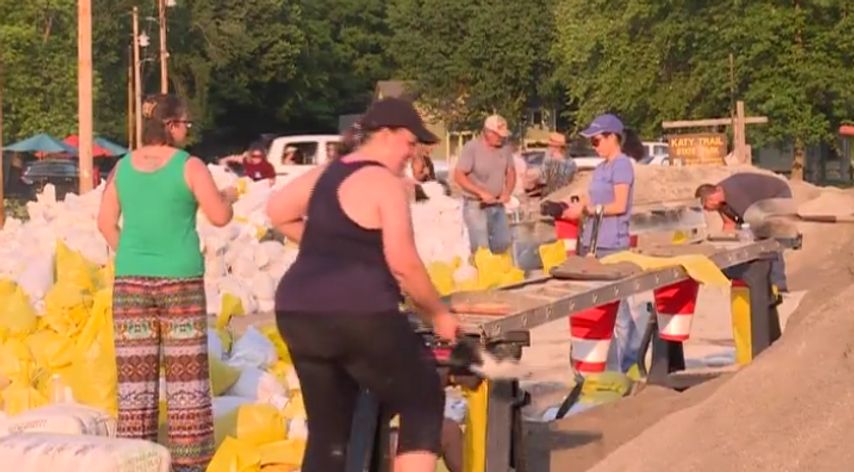 ROCHEPORT - Volunteers in Rocheport say they are "racing against the river" to protect their town from flooding.

About 60 volunteers had been sandbagging along the Missouri River everyday since last Friday. The group said they plan to build a sand-bag wall along the length of the city.

The city's alderman, Conrad Yates, said they hope to build the wall about 5 feet tall at its highest point. As of Friday night it was about 3.5 feet.

Volunteers continued sandbagging Friday night and into Saturday morning to stay ahead of the rising waters.

They stopped shortly after midnight when they ran out of volunteers.

He said Saturday the US Army Corps of Engineers provided them with a machine that speeds up the sandbagging process. He says the machine makes one sandbag every 4 seconds.

The river in Rocheport, Friday, was at the second highest level it's ever been in recorded history.

Yates said building the sand barrier is urgent and will require more people.

"In river towns we are used to living by the river. But it's uncommon for it to come this high," Yates said. "But when it comes this high we rise to the occasion and I think we are going to win but we need help."

Volunteers estimate they've made about 40,000 bags of sand since they began their efforts. Yates said they will need to double that amount.

Yates said the US Army Corps of Engineer

He also pointed out that many of the businesses in Rocheport are in the center of the town and not in the flood zone. But he said this does not make the flood prevention effort any less important.

"To the casual visitor going through Rocheport, flooding may not seem like a threat," Yates said. "But we have people with homes that are in danger and we need to help them because they're our neighbors and we love them."

Yates said the group plans to continue sandbagging until the river crests. He said volunteers wishing to help them can meet them near the banks of the river on the intersection of First Street and South Pike Street.

The Katy Trail state park which goes through Rocheport is already flooded in many parts of the state including in Rocheport, according to Missouri State Parks.

Friday, the department announced it would cancel the ride.