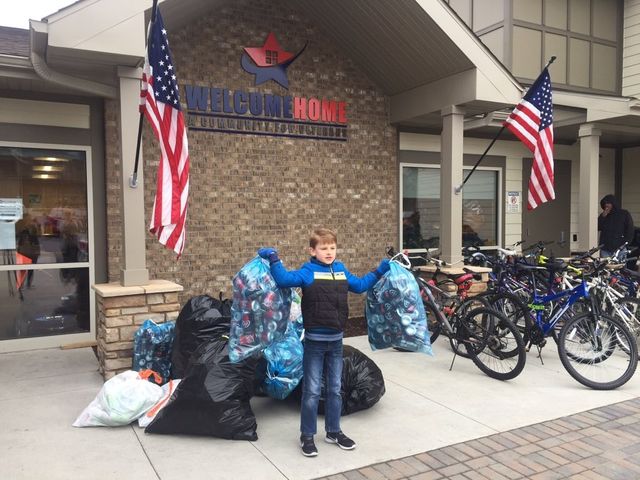 COLUMBIA - Auggie White wakes up on Saturday mornings, crushes soda cans, recycles them, and donates the proceeds to Welcome Home.

"I want to help the veterans who don't have a home," Auggie said.

In January, Auggie started collecting cans to raise money for veterans in mid-Missouri. His initial goal was to raise $500 by December 2018. In a matter of weeks Auggie not only reached his goal, he doubled it.

Samantha White is Auggie's mom. She said the idea came to him around Christmas time in 2017.

"We went to the Welcome Home Christmas party and Auggie and his sister were wondering why the veterans didn't have any presents," Samantha said. "He then decided he wanted to find a way to make donations to the home."

She said it all started in the family's subdivision. A few families would drop off cans here and there. Auggie would take them to his mom's garage and crush them with his crusher that's mounted on the wall.

"Now we have people dropping off cans to the house, his school, and Welcome Home every single day, it's amazing," Samantha said.

Megan Sievers is the director of development at Welcome Home. She said Auggie's efforts give the veterans something to look forward to.

"When Auggie started this we shared it with our veterans and immediately they started thinking of ways they could help him," Sievers said

Once people in the community caught wind of Auggie's efforts his mom created a Facebook page making it easier for people to connect and give.

"We initially only wanted people to donate cans but then we started receiving calls about whether or not people could donate money too," Samantha said.

Although Auggie has already reached his initial fundraising goal, his mom said they have no plans to stop collecting cans or fundraising. In fact, the future of his movement may be coming to a school near you.

"We're getting phone calls from teachers and students who want to help Auggie and so we are working on ways we can let everyone help veterans at Welcome Home," Sievers said.

In the meantime, Auggie plans to keep collecting cans.

"I like getting the bags of cans and crushing them with my mom and at my dad's house too."