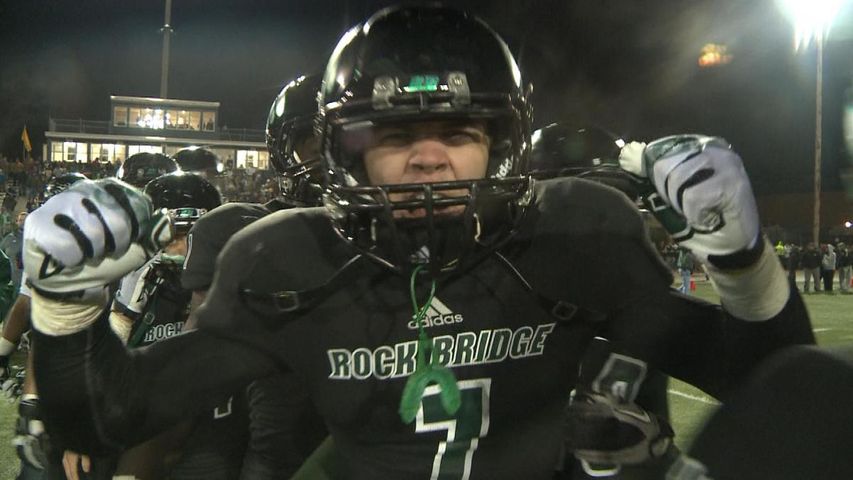 COLUMBIA - The Rock Bridge football team started the postseason with a 4-5 record. Now, they are 8-5 and headed to St. Louis to play in the Class 6 State Championship.

The Rock Bridge Bruins football team beat the undefeated Hazelwood Central Hawks by a score of 36-33 to advance to the championship game. This will be their first appearance in the game since 1993. The Bruins won three straight road games before coming back home for tonight's win.

While Rock Bridge quarterback Logan Twehous struggled in tonight's game throwing six interceptions, he made plays when it mattered: the second half. Twehous threw three touchdown passes as the Bruins outscored the Hawks 29-20 during the second half. Rock Bridge wide receivers Alex Ofodile and Zach Reuther both ended the night with two touchdown catches, including the one Reuter caught to give the Bruins the lead with 2:12 left in the game.

Hazelwood Central running back Kevin Batt burned the Bruins defense throughout the game to the tune of 331 yards rushing and three rushing touchdowns, but he made a mistake that costed the Hawks the game. Batt fumbled the ball in the red zone and the Bruins recovered with 56 seconds left in the game.

Other than Batt's fumble, Rock Bridge's defense managed to stop the Hawks from scoring on multiple occasions. The Bruins managed to block two kicks in tonight's game: a field goal during the Hawk's first drive and an extra point after Hazelwood Central's first touchdown.

Rock Bridge will chase their first state championship since 1977 as they will play Blue Springs High School for the Class 6 State Championship game. Blue Spring beat Eureka 42-14 tonight for the right to face Rock Bridge in the championship. The game will be played on Nov. 29, 2013 at the Edward Jones Dome in St. Louis, MO.

KOMU 8 Sports will have more coverage tomorrow on the rest of the state football playoffs and will be in St. Louis for full coverage of the games.