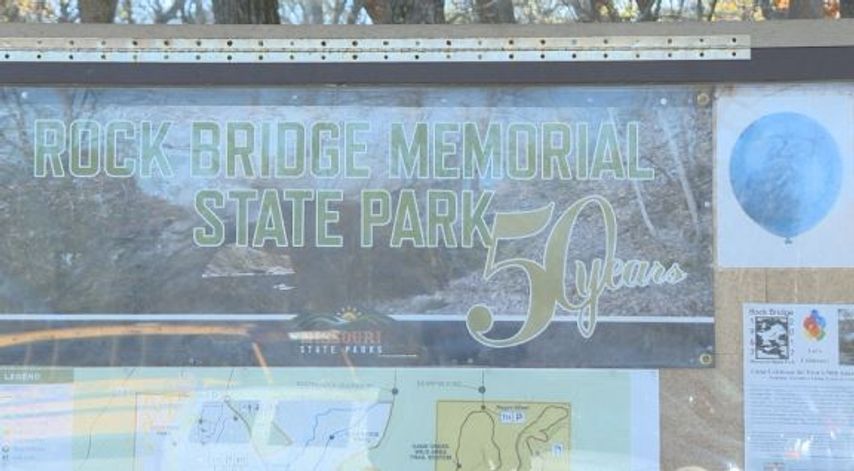 COLUMBIA - Rock Bridge Memorial State Park is celebrating it's 50th anniversary with a day filled with activities and music. Event organizers are hoping for a large turnout at the Devil's Icebox trailhead.

People who attend the event will able to choose from a variety of activities like a scavenger hunt, tours of Connor's Cave and Hickam's Log Cabin and hikes to Coyote Bluff.

Attendees may also meet park founders and their families, listen to musicians like Pippa Letsky, Anna Duff, The Calvin Street Band and Banastre Tarleton and get hot food and drinks.

Organizers said "Bigfoot" may make an appearance along the trail.

Park Naturalist Roxie Campbell said there is a lot to look forward to.

"We hope to simply celebrate, but also to recognize those who were very instrumental in creating the park and, of course, maybe for those that are new to the park or haven't received some of the history information, they'll come way with an increased awareness and appreciation for the park and its history.

Campbell said the park's history is a moving one.

"It started with the tragic death of a girl in 1961," Campbell said."Her parents, Lou and Dorothy Stoerker, as they struggled with that, eventually Lou developed a vision to create a park as a memorial and a safe place for children to play. Others came on board in the community and it became very much a full community endeavor."

Through fundraisers, private donations and gifts from local companies, the community raised $175,000 by 1962, a number that was matched by state funds, so it became a Missouri state park.

"People for many years have been enjoying the rock bridge and the caves and the streams and the woodlands," Campbell said. "That was through the generosity of the landowner here, Dennis and Naomi Ingram, who allowed people to just come and visit and enjoy the area for about 45 years before it was campaigned to become a park started."

Campbell said she hopes people realize how vital the park is.

"We have a mission that I think is important to protecting the park's resources, both natural and cultural, educating people about the resources and providing outdoor recreational opportunities," she said.

"There have become more challenges to the natural resources in terms of development around the park could impact water quality in this area. Also things that have been totally out of our control like the white nose syndrome that's been affecting bats. We monitor and do what we can to help bats and other animals in this area."

The park's location is a big draw, Campbell said.

"You know, when you get off work and you only have an hour or so to get outdoors it makes a huge difference that it's close by," Campbell said. "This is one of the few state parks that is close to a metropolitan area. You don't have to drive two or three hours to get there."

"Being outdoors is very therapeutic for adults and also for children," Campbell said. "They've found that children need time to discover and explore outdoors, and of course, Stoerker's goal was to create a safe place for children to play. What better place than nature where you can discover what the world is like.

The event is free to attend and will be from 11:00 a.m. to 3:00 p.m at the Devil's Icebox Trailhead in Rock Bridge Memorial State Park.