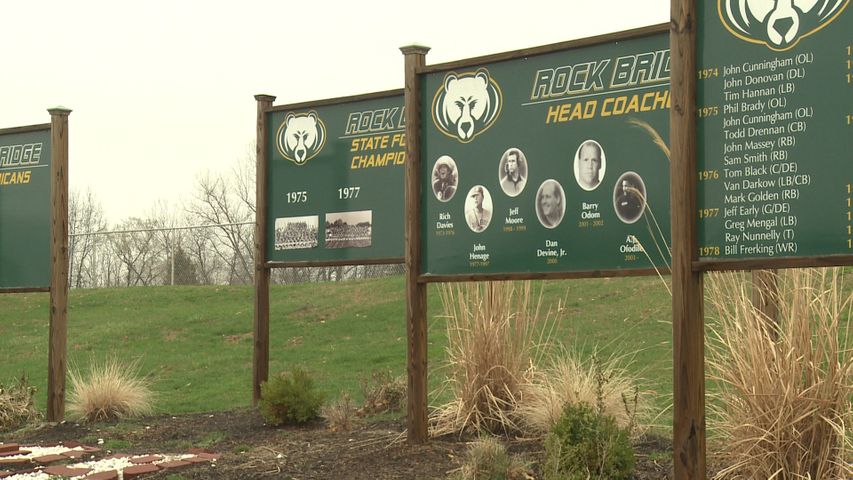 COLUMBIA- Six-foot and 315-pound A.J. Logan is one of the biggest Missouri Football signee's this year. A.J. Logan is a a former Rock Bridge Defensive Lineman and a future Freshman for the Missouri Tiger football team.

"Yeah, I always knew I wanted to go to Mizzou," Logan said. "There was no doubt in my mind when I was thinking about getting big scholarships and stuff. I was like: 'if Mizzou offers I am going to Mizzou.'"

His future may seem clear now but his path to get there wasn't. Logan's father was not around growing up and his single mother was in and out of jail and drug rehab, which lead A.J. to look up to his older brother, Blake.

"He didn't always get into the right stuff and I was kind of going down that path with him cause I wanted to be like him," Logan said.

In 2010, Blake was sentenced to 24-years for second-degree murder.

"I mean it hurt a lot to see him go away cause that was my dad pretty much," Logan said.

A.J. says he will never forget the day Blake got sentenced. Yet, he was still followed that same path, until a different kind of family changed his direction.

"I think it was sophomore year toward second semester Jane Piester and Coach Ofodile pulled me into the office cause I was skipping practices, I was going to classes but wasn't doing the work," Logan said. "I was going down the wrong path not doing the the right things and he pulled me in and was like: 'you have so much potential you don't even realize it, you haven't even scratched the surface of what you can do. What you can be.'"

"You know all these great qualities he has that are really kind of going to waste because he is not taking the right steps," Ofodile said.

"I changed right there I immediately made a change. I was like: 'I don't need to keep going down this path, it's not doing anything but hurting me so I might as well do something positive for myself and for others," Logan said.

Logan's improved maturity helped him to 2 All-State seasons, a Divison 1 scholarship with Missouri and gave him traits needed for a different part of his life--fatherhood.

"He is the reason that made it happen, Logan said. "It is unexplainable the motivation a child gives you to do better. I felt like he was a huge part of that so I wanted to hold my son and let him be part of that."

"You know he does a great job," Ofodile said. "You can tell he is a proud dad. He was right there with him on signing day so it's pretty exciting to see."

Logan wants to make sure his son, Aven, has a different up-bringing than he did.

"To me it was just something, a model not to do," Logan said. "It just showed me what not to do. To be able to be there for your children and make sure they have everything you didn't have--that's what every parent's goal should be."

Although Logan realizes with being a college Freshman, football player and father, things are bound to get a little noisy.

"I have to go to Mizzou, put in my work in, do my shool work, then be a father cause I know in the long run that it all will pay off for him in the end," Logan said. "Hopefully, my goal is to make it to the NFL. That has always been the goal. I am going to strive for that but doesn't happen I am going to have a fall-back career with my degree."

Coach Ofodile, a former NFL player and MU Tight End feels Logan is a guy that can play on Sundays, but for now he feels Logan is set for Saturdays in the South.

"Really that is what makes the South special period, is big people that can move and he is one of those guys," Ofodile said. "I think he is going to fit in really nicely."

Logan said he feels honored that his family can join the Tigers.

From one Providence stadium to the next, A.J. Logan is keeping his eyes on the future as a football player and a father.