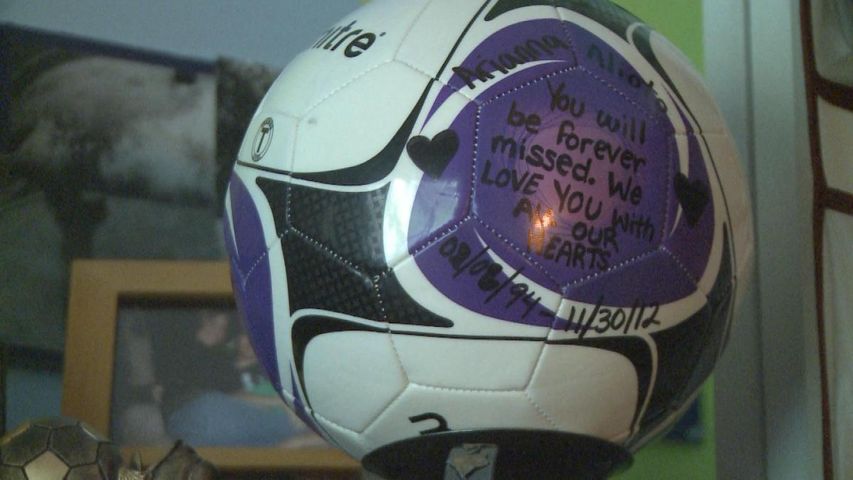 COLUMBIA- This past Wednesday was the first Anna Alioto Memorial Classic, held in memory of a fallen player.

"She loved Rock Bridge season cause you are with each other everyday and we were all so close last year we we're such a family," said Anna's former teammate, Aubrie Cornell.

A family with a captain devoted to soccer.

"It was everything really to her," Rock Bridge player Haleigh Fancher said. "She would do anything. She would stay after practice and work on everything she could to get better."

"She played with a lot of heart and she loved the game she loved what she did," former teammate Morgan Bumby said. "She would get frustrated really easily but we were all like Anna keep your head in the game your fine."

Last November Anna's dream come true of playing college soccer came to a tragic end. She drowned during a team workout in Northern Michigan's pool. Though the autopsy was inconclusive, the family says her death might have been linked to her having epilepsy.

"I called my sister and I was like what happened? Is it true? And she was bawling," Bumby said.

"And my mom got a phone call and she didn't even tell me, I just knew it. She was like it's Anna," Cornell said.

"I feel an empathy that I might not have felt before having sufffered this loss," Anna's father Anthony said.

"You can find some light in it," Alioto said. "This is what this experience has done. I'd rather share that light with people."

And Anna's light even shined off the field.

"I miss her laugh a lot. She had a really funny laugh... and just like everything," Cornell said.

So the Bruins remember Anna the best way the know how--playing soccer.

"Every game we just want to go out there and win for Anna cause we are getting a chance to do something she wanted to do her whole life," Bumby said. "She dreamed of playing in college and doing big things, so just make the most of the opportunity she's not getting."

But no game would be more important than this past Wednesday's, the 1st annual Anna Alioto Memorial Classic.

"I want to win for Anna. She hated losing," Cornell said. "We all hate losing but I mean this is a game she would have wanted us to win."

Cross town rivals got together for something bigger than soccer on Wednesday. Giving gifts to Anna's family and playing a game they'll never forget. It took a double over time thriller but Rock Bridge made sure the Alioto's got their win.

An exciting finish but just the first classic of many to come.

"As long as we are here we will be happy to hand the trophy off," Anna's mother Armine said. "As long as they want to do it."

One sport. One classic. In loving memory for Anna.