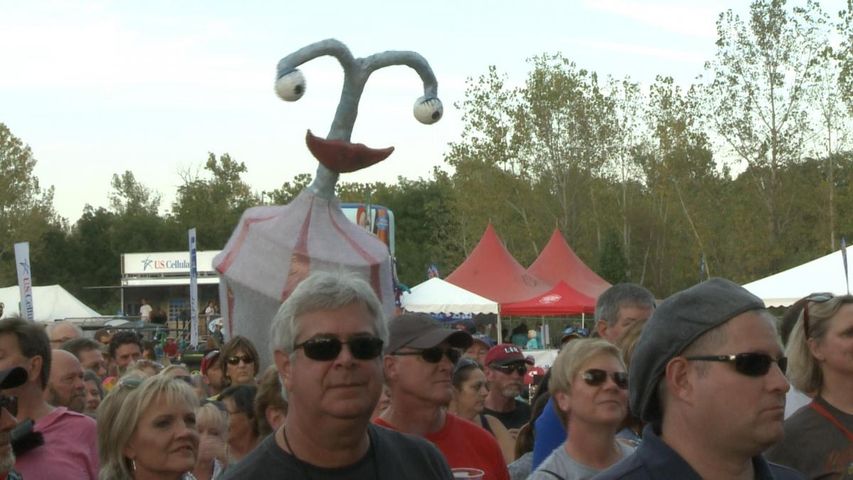 Some festivalgoers enjoyed the entertainment from lawn chairs, as others could not stop dancing to the music.

"It's hard to stand still while you're here," Sheena Cox of the Giant Puppet Troupe said. "That's why it's great that we're able to groove with these to the music."

It's the Giant Puppet Troupe's third year participating and Nick Spooner said they have no intention of stopping that trend.

"Everyone's having a great time, in a different way than other festivals," Spooner said. "You don't have to deal with all the other problems that go along with raves and still get to enjoy everything around you."

A variety of food tents and artist groups outlined the heart of the park, where people of all ages enjoyed the festival. The combination of visual art and live music is what keeps some coming back for more every year.

"This entire park transforms, and it's so incredible to see," festivalgoer Laura Flacks-Narrol said. "People forget that a place like this can become what it does this weekend, every year."

Some music fans expected headliner Buddy Guy to overshadow the other acts from earlier in the day, but other fans were just as excited to see the earlier acts.

"I haven't heard much of Buddy Guy's music yet," Narrol's son, Jordan Narrol, said. "But Tab Benoit was awesome, he was so good."

Festival Director Julie King said around 27,000 attended the three-day festival last year and they expect the same amount this year.

For a complete list of artists and times, head over to the Roots N Blues N BBQ Festival website.