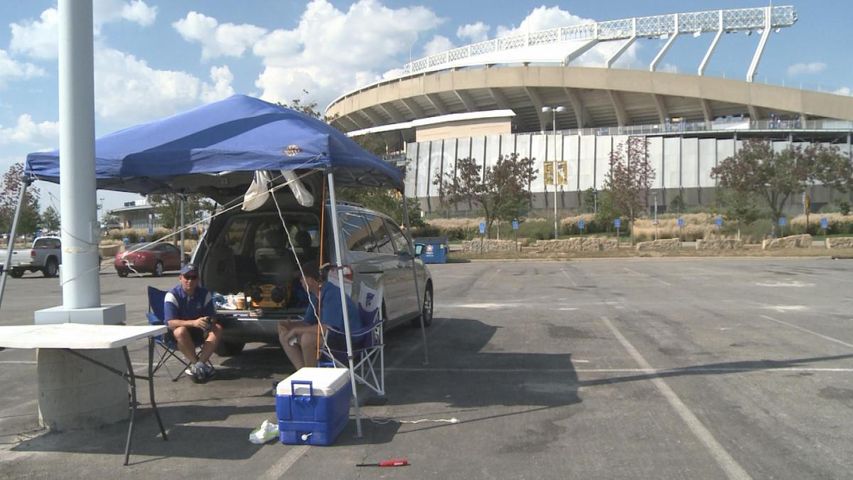 Longtime Royals fan Sean Wille said he and his friends buy season tickets every year with the hope the team makes it to the playoffs, but more than a decade passed and the season ticket holders never reaped the benefit of guaranteed postseason tickets.

"For 11 years we've bought tickets, but this is the first time we'll get the benefit of guaranteed postseason tickets - all the way through the World Series when we make it," said Wille.

Wille said the days leading up to Tuesday's game were full of careful strategizing and comparing to the 1985 Royal's team who won the World Series 11-0 against the St. Louis Cardinals in 1985.

"We were counting down and tracking the days, the games, day by day knowing what had to happen," Wille said. "Really what was going through our minds was were going to find a way to ruin this."

Wille may never of been so happy to be wrong. He said the day the Royals secured the spot in Tuesday's game fell on a list of very important life events.

"Besides the birth of our kids, or marrying our wives, this might be the best day of our life," he said.

The excitement by the Kansas City faithful sustained throughout the nearly five-hour game. From the parking lot, the few scattered without tickets could still hear the roar of the crowd with every move the Royals made. While the first pitch sailed at 7:07, the party started hours earlier.

Casey Hofer skipped college classes with his friends to attend Tuesday's game. He said he's been a Royals fan since the day he was born. He said his first pair of shoes, a pair of blue Kansas City Royal Converse, still hang on the knob of his bedroom door.

Hofer compared the stress going into Tuesday's game to the first day of finals week.

"I'm really, really nervous," he said. "I think today's atmosphere will be unlike any atmosphere I've ever experienced at any sporting event, Chiefs' game, Royals' game, anything like that."

A nervous moment came when the A's scored five runs in the top of the sixth, putting the Bay Area team ahead 7-3 over the Royals.

"It's just angry one moment, happy the next moment," fan Carson Steele said, "A lot of sadness, a lot of everything,"

He said he couldn't remember a game this exciting before and couldn't nail down just one favorite moment.

"Pretty much everything," he said. "Except for the bad parts."

Despite being decades younger than most of the Royal's faithful, Steele pitched some advice to the team.

Steele said even those who weren't able to attend Tuesday's hot ticket game should continue cheering on his beloved team.

"I think you should keep rooting for the Royals and if they win, well then, you might as help them win everything."

The Kansas City Royals play the Los Angeles Angels in Game 1 of the AL Division Series Thursday at 8:07 p.m.