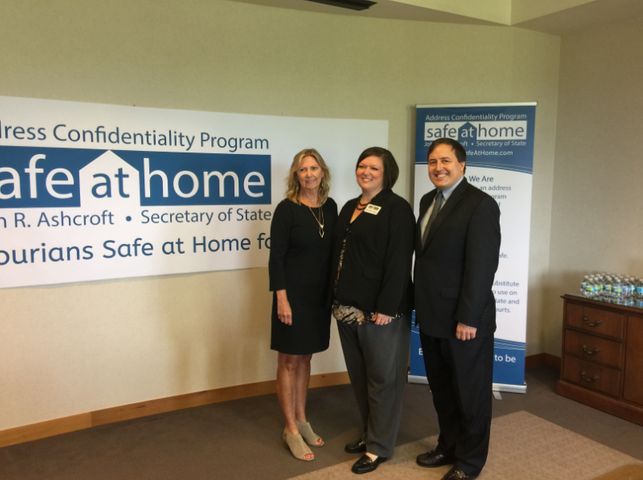 Ashcroft said, "it's a great, low cost program," that sees continued need in Missouri. Participants in the program can protect their whereabouts from abusers.

For abuse victim Carol Cromer, who spoke at the event today, the program saved her life.

“It was his mission to take his life and mine. There were no laws, no court orders, no consequences that could stop him.”

Cromer was a victim of domestic abuse from her ex-husband. She said she never imagined the mayhem that would follow soon after she filed for divorce.

“He stalked me at work, wherever I stayed. After multiple threats he began setting our cars and home on fire. One evening he came to one of my sibling’s homes where I had been staying and he fired multiple gunshots through the windows,” Cromer said.

But the process to keep her address and personal information protected from her abuser was difficult in court hearings which required her residential address to be public.

“I quickly realized navigating the courts and its systems safely would become one of my most difficult and vulnerable pitfalls. My abuser’s path of violence was enabled in some part by the trail of paperwork with personal information that I was ordered to expose in court at each and every hearing.”

After what seemed like endless intimidation, Cromer escaped from her situation and found refuge in the Safe at Home Program.

“It was at this darkest moment of giving up when I received a phone call with an opportunity to take part in a brand new program from the Secretary of State’s office called Safe at Home.”

Although the program was in its early phases, Cromer says Safe at Home “pulled her out of the darkness” to protect her personal information.  “It was the lack of protection allowing that information to end up in the wrong hands. His hands.”

Secretary of State Jay Ashcroft started the program in 2007. Safe at Home has since helped more than 4,000 victims of domestic abuse, stalking and harassment to protect their personal information and whereabouts private from abusers. Participants can have their mail routed through the post system to conceal their location.

Missouri is one of 36 states who have similar privacy protection programs.

Ashcroft says there’s a continued need for the program in Missouri and changes should be made to involve the federal government in recognizing Safe at Home policies at the federal level.

His office is also working to strengthen the Safe at Home program after St. Louis Circuit Court Judge Sandra Farragut Hemphill ordered a woman to reveal her address in a divorce case in January.

“Under the law at the time, that was not supposed to be done. We tried to intervene in that case to stop the disclosure to make sure it would not happen again,” Ashcroft said.

Ashcroft said despite the error, the victim was ensured safety throughout the process at a safe location. The program also asked all of its participants to reapply for Safe at Home “in an abundance of caution” after the judge’s error last spring, according to Ashcroft.

Ashcroft says the law is being rewritten to make it clear the Secretary of State’s office decides who is a participant in the Safe at Home program and to protect future instances that would reveal a victim’s personal information.

For victims like Cromer, Safe at Home provided an outlet for her to return to safety.

“The decision to leave an abuser may seem simple, however to the victim, leaving an abuser becomes extremely complex,” Cromer said.  “I would not be here today without the Safe at Home program. It saved my life.”

To learn more about the Safe at Home program or to apply, visit www.sos.mo.gov/business/safeathome.

If you need to seek refuge from an abuser, visit True North or Rainbow House.