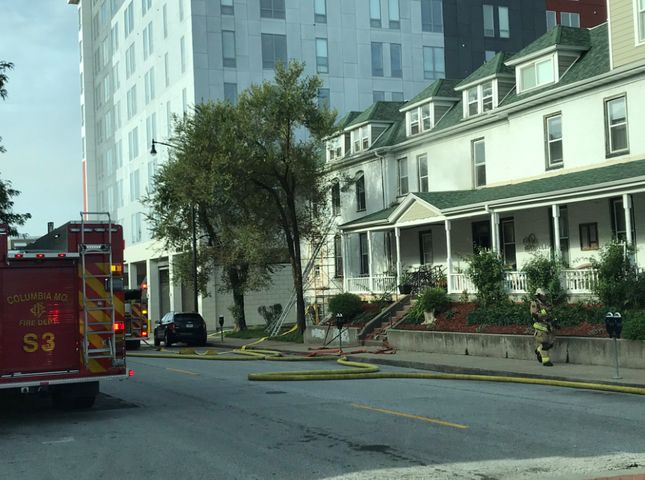 COLUMBIA — The owner of one of Columbia's oldest buildings is glad he invested in fire sprinklers when he bought it.

On Tuesday morning, a small kitchen fire broke out at Niedermeyer Apartments on Cherry Street.

It took around two minutes from when the Columbia Fire Department received the alert to when they arrived at the scene. Assistant Fire Chief Brad Fraizer said if it weren't for a sprinkler system installed in 2013, the situation could have been much worse.

"While it was unfortunate that we had a fire there, we're very thankful that there was a sprinkler system in place, it worked as intended," Fraizer said.

The 183-year-old building is one of the oldest buildings in Columbia. In 2013, Nakhle Asmar purchased the building to prevent it from being demolished. When he bought the building, Fraizer suggested Asmar install a sprinkler system since the building had been grandfathered in.

"He said, the rules, you know 'you don't have to do it, but you'd sleep better if you installed a fire sprinkler system,'" Asmar said.

The fire began when a tenant set a bag on top of the stove. According to Asmar, the tenant called the city to turn the power on in his apartment, not realizing the stove had been turned on.

"You got a situation where [the] tenant has the power turned off because no one is in the building, in that particular unit," Asmar said. "Puts his stuff on the stove, calls the city and connects the power and the stove happens to be on also."

Linda Libert, a resident and building manager, was there when it happened.

"You could see the water hitting the window in the alcove," Libert said. "Water was blasting that window and all you could see was black smoke."

Libert made sure everyone evacuated the building, even though the sprinkler helped control the fire.

"We then proceeded to run up to the third floor, got everybody out floor-by-floor, whether it be through the back fire escape or through the multiple exits of the building," Libert said.

Columbia Fire Department estimated the fire and water damage caused around $10,000 in total property damage and reported the fire to be accidental, since nobody was in the apartment when it caught fire.

Asmar says it's the first time since he's owned the building that an incident like this has occurred.

"I don't know if there were any incidents, but at least not on my time," Asmar said.

Asmar says he's thankful for the advice from Chief Fraizer and he's glad the sprinkler system did its job.

"No one was around. That's the amazing part, is that the fire was put out before people knew there was a fire," Asmar said. "I don't know what could have happened if the sprinkler wasn't there."